SafeJournalists: Death threats to Danas newsroom – sixth assault on journalists in a week in Serbia 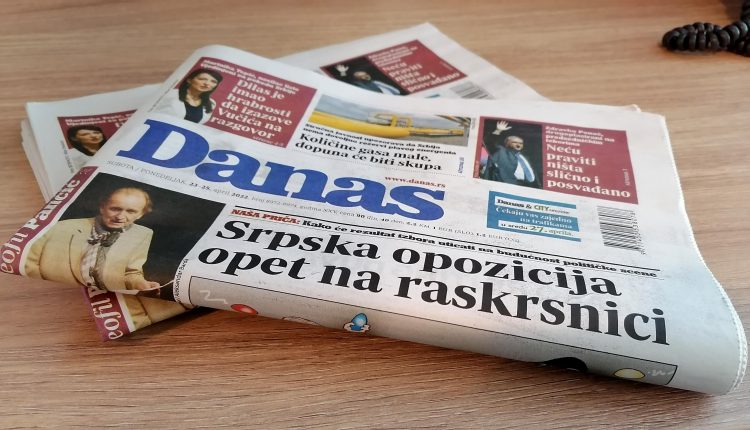 Yesterday, April 22nd, the newsroom of the daily newspaper and portal Danas received a series of insults and death threats via social networks and email because of a quote from Mahatma Gandhi that was published in a print edition and on Danas’ Instagram page, in which stand: “True, and not God.”  An action was even launched calling on the citizens to send messages to the newsroom in the inbox: “God is the truth”. The threats were reported to the relevant prosecutor’s office and the police.

“We will slaughter you all”, “We will slaughter everyone who works for this sect one by one”, “And you are on the list! You will be judged! GOD IS THE TRUTH! ”,“ You are the worst sect, hope you got cancer you fu*king provocateurs! ” – these are just some of the threats and insults that Danas have received  yesterday.

The president of the Independent Journalists’ Association of Serbia, Zeljko Bodrozic, condemned the threats and insults which journalists of daily Danas received yesterday.

“This is another indicator of what targeting and campaigns against critically oriented media lead to. Danas is often the target of various types of pressure and attacks, but the last series of threats are frightening, especially bearing in mind that everything happens during religious holidays. We appeal to all citizens, and especially to political actors, to refrain from rhetoric which deepens divisions in society and leads to such terrible threats,” said Zeljko Bodrozic.

According to the records of the Independent Journalists’ Association of Serbia, the mentioned case is the sixth incident on journalists in Serbia in the past week. Before Danas, the building of the Hungarian Media House in Subotica was attacked, journalists of N1 television were threatened and attacked three times, and the last one was attack on team of the Nova.rs website.

Since all the incidents happened just before the Easter holidays in Serbia, and the last case has a religious connotation, NUNS appeals to citizens to refrain from actions that are not in the Orthodox spirit or any other religion represented in our country. This should certainly be a practice regardless of the religious calendar.

SafeJournalists Network, representing more than 8,200 media professionals in the Western Balkans, joins its member IJAS in condemnation of the threats against journalists of Danas. We call on relevant institutions in Serbia to act and secure the safety of journalists. We also hope that the authorities will conduct the entire procedure swiftly and punish the perpetrator.