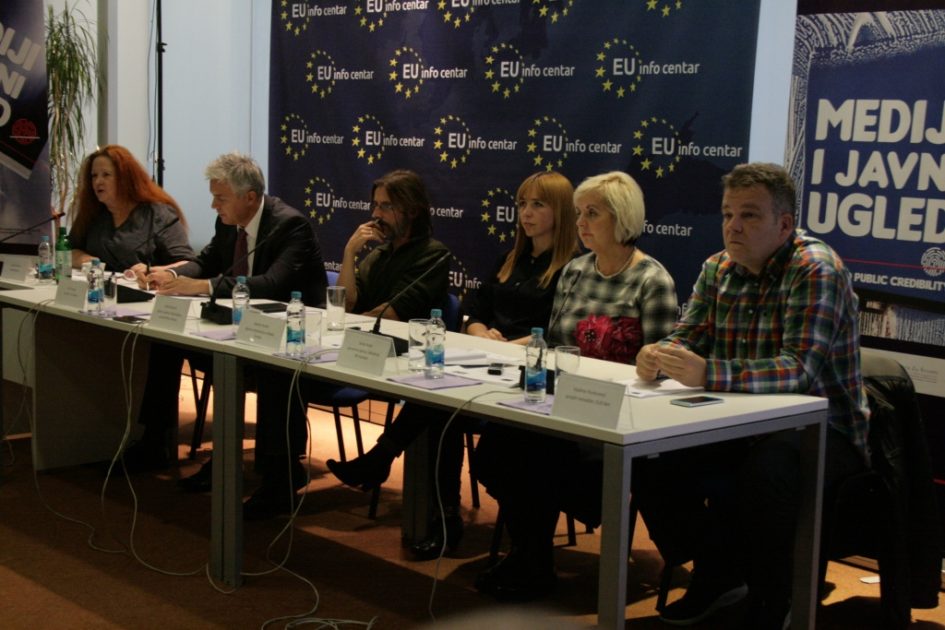 The transparency of media ownership and financing of media in Bosnia and Herzegovina is not regulated and allows instrumentalization and abuse. Also, it is doubtful that the exercise of the functions of media public interest is without adequate monitoring, these are some of the conclusions of the report “Looking for better ownership transparency regulation and media financing from public budgets” which was presented yesterday in Sarajevo.

The report was prepared under the project “Media and public reputation,” funded by the European Union and implemented by a Consortium consisting of BH Journalists, Mediacentar Sarajevo, the Press Council and the Association JaBiHEU. The presentation was opened by Vladimir Pandurevic, project manager of the EU Delegation in Bosnia and Herzegovina, who on this occasion, stressed that he hopes “that this project will result in the adoption of adequate legislation in the field of transparency of media ownership and advertising,” and that in this sence “the authorities will implement the recommendations of non-governmental sector”.

In the opening statement, Borka Rudić, General Secretary of the Association BH journalists, said that the project “Media and public reputation” was presented in the Parliament a year ago, and that the presentation is the result of one year serious research of BH practices in the field of media ownership transparency regulation, media financing from public budgets and advertising. “We are pleased to say that we have completed the most difficult part of the work in this project, and these are the recommendations for the adoption of the two laws and transparent media financing from public budgets. These are topics that are often accentuated in recent years in the reports of the European Commission on the progress of B&H in the process of EU integration”, Rudić said.

Saša Rukavina, executive editor of Oslobođenje newspapers, said that it is important to know who owns a particular media: “When it comes to print media, it became clear since 1996 when the state decided to no longer sovereign public print media. As far as the portals are concerned, for more than 60 percent of them, we do not have information about the property, and the only disclosed information is marketing department contact. We should know the ownership of particular media“, Rukavina said, particularly emphasizing the importance of regulating the marketing industry in B&H, which constitutes an important sector for survival and media financing.

The director of Hayat TV, Elvir Švrakić supported the efforts of the media community to regulate media ownership and financing in a transparent manner: “It is also necessary to devote attention to the question how many media can be owned by one person. Transparency is very important, none of the owners do not need to be hidden because the media use state public resource – frequencies. I think that this issue should not be the responsibility of the Communications Regulatory Agency. In the neighboring countries there is usually a specific body responsible for regulating the ownership transparency. It also raises the question of editorial policy and its connection with the financing. An example is Agrokor. In fact, only when charges were brought, some media began to report on this case“, Švrakić pointed out. 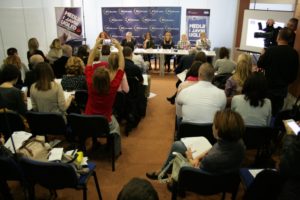 Sanela Hodžić, editor and co-author of the Media Center research, has presented some of the main findings and recommendations to create transparent law on ownership and media financing through advertising. In the part of the media financing, Nermina Voloder and Milan Živković were the co-authors of the study.

“We can say that the regulation of media ownership and financing of media in B&H is minimal at this time so that in any way one had not disabled hidden ownership or instrumentalization of public funds for personal promotion rather than for the promotion of journalism and communication needs of citizens”, Hodžić said, adding: “When it comes to the registration of ownership, there are registers of businesses, foundations data and CRA registers about license users for audiovisual broadcasting, but the information on indirect and related owners are not listed in these registers. Also, the CRA’s rule on concentration of media ownership expired in 2006. In addition, an insight for public is made more difficult as to who is behind some of the media and those who exert influence on the media”.

The research “”Looking for better ownership transparency regulation and media financing from public budgets” resulted in recommendations for transparent funding of the media, and it is the adoption of legislative and regulatory solutions that would: cover all media sectors and media-related sectors, ensure the transparency of direct , the indirect owners and shares, ensure transparency of interests in other companies (especially media and related sectors), ensure transparency of information about the interests with the owners of related legal and physical persons, the main sources of income, the management structures and major media editors, as well as information about political connections of the owners. It is also necessary to regulate the issue of data collection and publication of data on these issues, as well as which institution or organization would be responsible for something like that. It is also important to regulate the excessive concentration of foreign ownership as well as the issues on  conflicts of interest.

When directing public money into the media, one should in particular take into account the characteristics of the media contents (own production, themes of public interest, representation of social groups, adherence to professional norms) as well as the characteristics of media organization itself (non-profit character, a larger number of employees, good protection of labor rights, well defined statutes, transparency of ownership). Ideally, the policies of financing the media must ensure the promotion of special shortage programs that are of public interest, but also the satisfaction of the general informative media function.

In order to achieve the independence of decision-making related to the financing of the media, it is necessry to appoint an expert committees, rather than political bodies that currently make decisions, the election of members of these committees on the basis of public competitions, clear and relevant criteria of competence, and norms against conflicts of interest. Alternatively, citizens can select the motion or the media which support will be allotted to.

In order to achieve legitimacy and transparency in the procurement of media services, it is necessary to explain the specific public interest in the given services and facilities, and to demonstrate that the specific public interest can not be secured without this specific procurement. In this process it is important to minimize the non-transparent negotiation procedures and direct agreements, and to ensure the basic principles of transparency, active competition, non-discrimination and the principles of the best price-quality ratio.

Recommendations in terms of financing of the media monitoring, including the procedures and the effect on the public interest, is the establishment of mechanisms for regular media reports, financial and programming, strengthening financial performance audits as well as monitoring of civil society organizations.

Editorial independence should be regulated by the statute regulating the appointment and status of editors and journalists (public calls, clear professional criteria, consultation with journalists on the appointment of editors, publishing information about the procedure, the reasons and procedures for dismissal, the introduction of the clause of conscience and the improvement of the status  and respect of labor rights ). Additionally, the system to  sanction non-compliance with these standards is necessary as well as the financial stability of the media and employees. Logically, the accountability of the media is necessary as well, and that would be determined through  financial and narrative reports, as well as through the copies of bills paid from the public budget funds and transparent reports on the overall business and information published in the impressum or closing programme word that the specific media is co-financed with public funds.

Summary of the research is available here, and the full text of the report will soon be published in electronic and printed form.