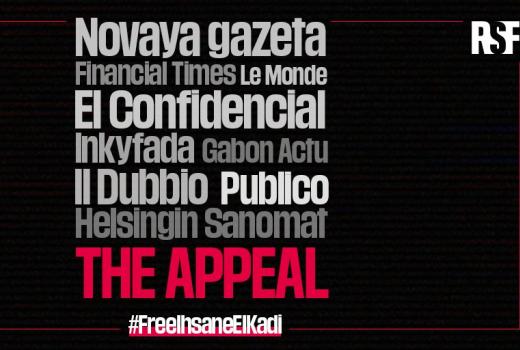 “Freedom for Ihsane El Kadi, freedom for Radio M and Maghreb Émergent, freedom for Algerian journalists” is the message issued today, on 10 January, in the international press by these 16 media leaders, who describe Ihsane El Kadi’s detention on clearly absurd grounds as an “intolerable attack on press freedom in Algeria”.

RSF coordinated this joint message eight days ahead of a hearing on 18 January in Algiers to consider El Kadi’s appeal against his detention.

They all call on the Algerian authorities to free El Kadi, drop all the charges against him and return confiscated equipment to Radio M and Maghreb Émergent so that their reporters and news presenters can go back to work.

“The level of international outrage is commensurate with the gravity of the attack on press freedom posed by Ihsane El Kadi’s imprisonment. The crackdown on Algeria’s journalists, of which he is the latest victim, shows a desire on the part of the authorities to silence the country’s independent media. The Algerian authorities must heed this appeal by those who head leading international media outlets”, said Christophe Deloire, RSF secretary-general.

El Kadi, who has long been the target of judicial harassment, is accused of having “used funds received from inside and outside the country to carry out acts liable to undermine state security, national unity, territorial integrity, the interests of Algeria and public order.” After being taken into police custody on 24 December, he was placed in pre-trial detention by an investigating judge in the Algiers district of Sidi M’Hamed and was transferred to El Harrach prison on 29 December.

We, news media leaders from countries around the world, regard Radio M and Maghreb Émergent director Ihsane El Kadi’s imprisonment on clearly absurd grounds as an intolerable attack on press freedom in Algeria. It poses a grave threat to the right to information, which is a right of all citizens and a requirement for freedom of opinion and expression, and for democracy.

It is unacceptable that the Algerian authorities arrested Ihsane El Kadi on the night of 24 December, paraded him in handcuffs, in a symbol of the media’s criminalisation, and shut down Radio M and Maghreb Émergent. How is it possible that the entire staff of these media outlets are being prevented from performing their social function, which is so useful to societies?

Algeria is already ranked 134th out of 180 countries in RSF’s 2022 World Press Freedom Index. We appeal to Algeria to demonstrate its attachment to the law and to democratic values, instead of resorting to systematic repression. We appeal to all media professionals throughout the world to join us in resisting and reversing this crackdown on Algeria’s media.

Together with Reporters Without Borders (RSF), we urge the Algerian authorities to free Ihsane El Kadi at once, to drop all the charges against him, and to return the confiscated equipment to Radio M and Maghreb Émergent so that their reporters and news presenters can go back to work. Freedom for Ihsane El Kadi, freedom for Radio M and Maghreb Emergent, freedom for Algerian journalists.