BH Journalists: Gorica Dodik’s inciting rhetoric against journalists and the owner of BN Television must be sanctioned! 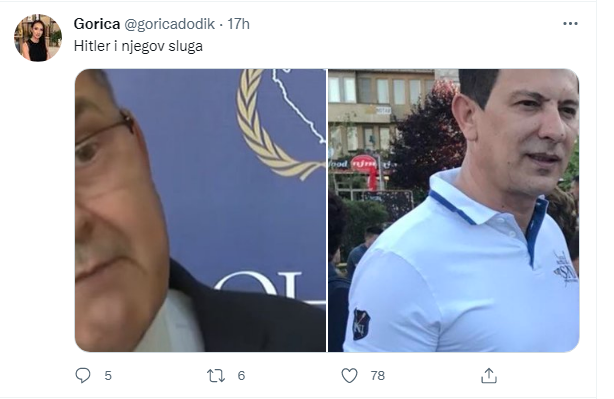 Sarajevo/Banja Luka, 13/10/2022 – The Steering Committee of the BH Journalists Association and the Free Media Help Line (FMHL) strongly condemn incitement and hate speech against Vladimir Trišić, the owner and director of BN Television, as well as all employees of this media outlet, and demand from the competent institutions in the Republic of Srpska to urgently investigate and prosecute persons who threaten and spread hate speech against journalists and owners of BN through social networks.

Employees and the director of BN Television are continuously exposed to inciting rhetoric, threats and insults on social networks, which mostly come from members and sympathizers of SNSD party in the Republic of Srpska. Gorica Dodik, daughter of SNSD president and Serbian member of the Presidency of BiH Milorad Dodik, on her profile on the social network Twitter on Wednesday published photos of the high representative of the international community in BiH Christian Schmidt and the general director of BN TV Vladimir Trišić, and in the description of the photos she wrote: “Hitler and his servant“.

In an earlier post from March of this year, Gorica Dodik published on Twitter a photo of Trišić with members of his family, including his minor child, with the claim that Trišić would “burn people alive” because he is a “monster”.

The Steering Committee of the BH Journalists Association emphasizes the fact that these and similar announcements provoke numerous comments from other Twitter users, in which Trišić and the journalists of BN Television are threatened, insulted, declared “national traitors” and the like, which has the effect of directly endangering the safety of the aforementioned persons. Although Gorica Dodik is neither a public figure nor a politician, the fact is that her posts from social networks are published by numerous media in Bosnia and Herzegovina, which only further incites incitement, hatred and intolerance among the public towards those who are the subject of her tweets.

We remind that the creation of such an atmosphere a few years ago resulted in one of the heaviest attacks on journalists in Bosnia and Herzegovina – the attempted murder of BN Television journalist Vladimir Kovačević, who was severely beaten in Banja Luka. Due to all of the above, the competent institutions, above all the Ministry of Internal Affairs of RS and the Banja Luka District Public Prosecutor’s Office, must urgently and seriously deal with the spread of hate speech on social networks and prevent another “Kovačević case” from happening!

The Steering Committee of BH Journalists and the Free Media Help Line appeal to MP’s in the Parliamentary Assembly of BiH to adopt, as soon as possible, the Proposal for Amendments to the Criminal Code of BiH, which would expand the framework for sanctioning hate speech, especially on the Internet and social networks. We emphasize that the effective protection of journalists, particularly by ensuring appropriate court proceedings in cases of threats and violence against journalists and media workers, is one of the fundamental conditions that our country must fulfill on its way to membership in the European Union, which was highlighted yesterday during the recommendation for candidate status of Bosnia and Herzegovina.