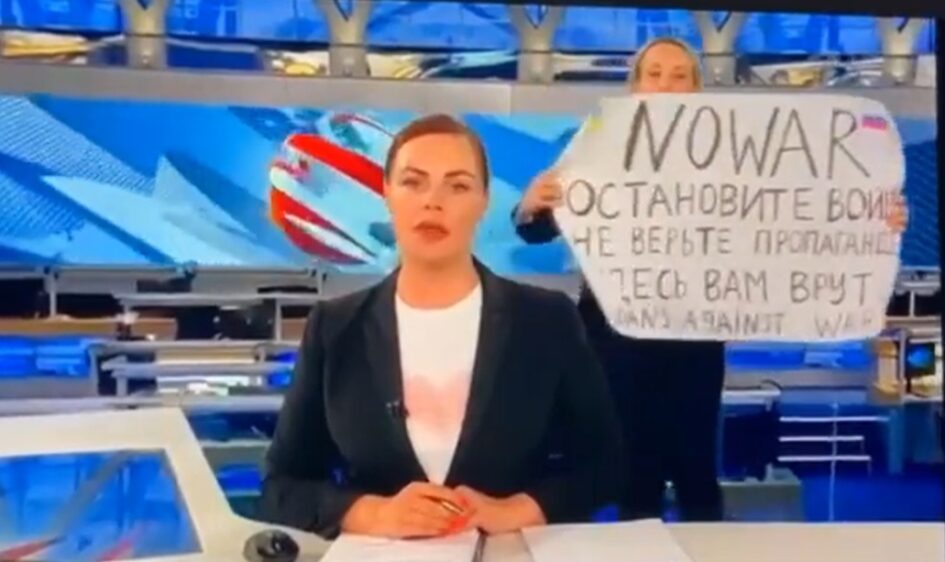 The Russian authorities arrested journalist Marina Ovsyannikova, an editor with the Russian television channel Channel One, on 14 March. During the evening news, she appeared behind the presenter holding up a sign reading “No to war. Don’t believe the propaganda. They are lying to you. Russians against war”. The European Federation of Journalists (EFJ) demands the immediate release of the journalist.

Marina Ovsyannikova interrupted the evening broadcast on Russian state TV network Channel One on Monday with a sign blasting Russian war against Ukraine. “Stop the war, no to war!” she shouted. Ovsyannikova was promptly arrested. The authorities say she will face misdemeanor charges for violating Russia’s new ban on so-called “disinformation” about Russian army operations.

In a prerecorded message shared on social media after the live-television incident, Ovsyannikova said: “What is happening in Ukraine is a crime. And Russia is the aggressor here. And responsibility for this aggression rests on the conscience of a single man: Vladimir Putin. My father is Ukrainian. My mother is Russian. And they’ve never been enemies. And this necklace I’m wearing is a symbol of that fact that Russia must immediately end this fratricidal war. And our fraternal peoples will still be able to make peace. Unfortunately, I’ve spent many of the last few years working for Channel One, doing Kremlin propaganda, and I’m deeply ashamed of this. Ashamed that I allowed lies to come from the TV screen. Ashamed that I allowed the zombification of Russian people. We were silent in 2014 when all this had just started. We didn’t protest when the Kremlin poisoned Navalny. We just silently watched this anti-human regime at work. And now the whole world has turned its back on us. And the next 10 generations won’t wash away the stain of this fratricidal war. We Russians are thinking and intelligent people. It’s in our power alone to stop all this madness. Go protest. Don’t be afraid of anything. They can’t lock us all away.”

“The EFJ pays tribute to the courageous act of Marina Ovsyannikova, who acted as a true journalist in the face of the censorship imposed by the Kremlin and the propaganda machine of Putin’s regime,” said EFJ General Secretary Ricardo Gutiérrez. “Ovsyannikova’s ethical act reminds journalists that they are there to serve the truth and the public interest and not the special interests of those in power. We strongly condemn the charges against her and demand that they be dropped immediately.”