Women’s Press Forum in Mostar: Women in politics must fight for more space in the media 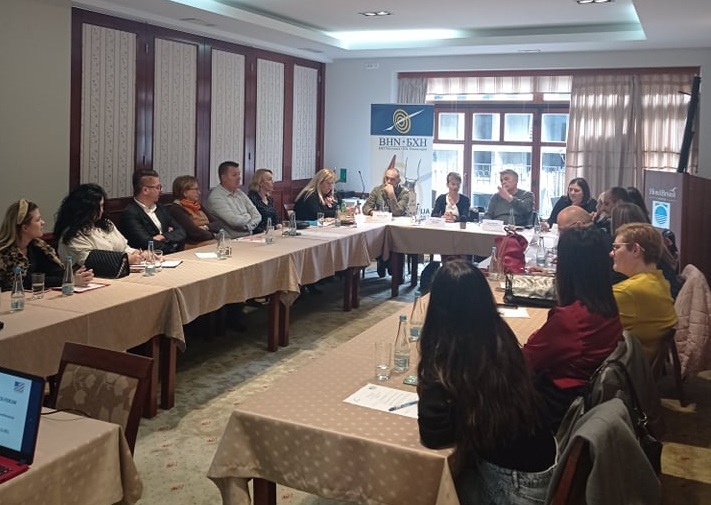 Mostar, November 9, 2021 – Women in politics must fight for more space in the media by offering attractive media content. It is devastating that there are no women in the current Government of the Herzegovina-Neretva Canton, while out of 35 councilors in the Mostar City Council, only eight are women, it was pointed out during the debate on the presence of women politicians in public and media space, held today in Mostar and organized by the BH Journalists Association.

According to Tihana Devenica from the Čapljina Radio Station, women in politics are more resentful of omissions than men. She said that in the presentation of candidates in election campaigns, there is a ratio of two men to one woman, and that the media are not the ones who can suggest to political parties which candidates to choose for the presentation of their campaigns.

The columnist and editor of the Bljesak.info portal Berislav Juric is of the opinion that women in the political life of BiH still mostly operate in the background.

“The media are not to blame for what is being placed in politics. The eyes of the public are different from the perspective of the media. We have to present what the public wants, and women must not be just ‘make-up’ in politics “, says Juric.

The editor of the Hercegovina.info portal, Kristina Peric, emphasized that no mayor has been elected in Herzegovina so far.

“The HNK government is a ‘male’ government, and how can the media give space to women when we don’t have female ministers? We have a lot of women who are silent, only some of them are brave enough to speak publicly and present their views”, said Peric.

Milanka Kovacevic, a journalist with the Direkt portal, also believes that women often agree to be just a decor in political life: “I don’t think the situation will change for a long time. Women let their party colleagues men to speak for them.”

Councilor of the First Mostar Party, Adela Gosto, reminded that the Law on Gender Equality of BiH guarantees 40% of women on the lists.

“I fought for myself and led the campaign to enter the City Council,” said Gosto.

At the top of the hierarchy of power on the political scene in BiH are men, and this is more than obvious – from members of the three-member Presidency, to the positions of prime minister and presidents of political parties, says Daniela Jurcic, assistant professor at the Faculty of Philosophy at the University of Mostar.

“Women can be seen in politics. I wonder why women are portrayed stereotypically and men are not? Stereotype in BiH society of women in politics is the portrayal of women through motherhood, ridicule of women and their physical appearance, sexual orientation and more, “said Jurcic.

Today’s debate in Mostar, which was attended by 25 participants, was organized by BH Journalists within the Women’s Press Forum, an informal form activity of journalists and politicians with the aim of increasing the presence of women in public space and media and their greater representation in executive and legislative bodies.

The Women’s Press Forum is held with the financial support of the United States Embassy in Bosnia and Herzegovina.