EFJ: Local media funding must be transparent and independent of politics 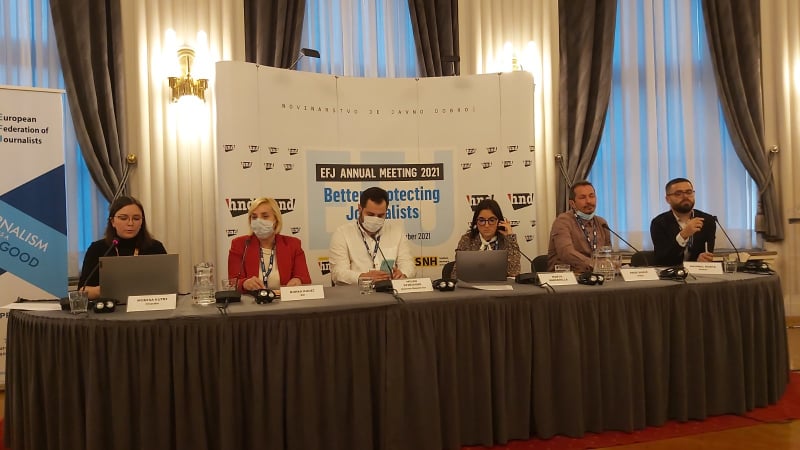 Zagreb, October 8 and 9, 2021 – It is necessary to find models for returning part of the public revenues collected through new – national or supranational – tax rules to media institutions through public subsidies and to request changes in legislation on national level to ensure a transparent system of local media funding and their efforts to devise a model of public support for local media that would make them independent of the local authorities whose work they monitor and review – this was concluded at the annual assembly of the European Federation of Journalists (EFJ), which was held on October 8 and 9 in Zagreb.

The statement on the work of local media in Slovenia, Croatia, Bosnia and Herzegovina and Serbia, adopted by EFJ members, states that the pandemic has significantly hampered the work of media outlets and led to salary cuts, layoffs or even closure of some media outlets, while at the same time the value of local journalism of trust has never been clearer.

-Most local media in Croatia, Bosnia and Herzegovina, Serbia and Slovenia are commercial companies, which seems to be their main problem. The capacities of the local economy are not so large that they could finance media production through advertising. Especially as more and more advertising moves to the internet, and the prices of traditional newspaper, television and radio advertising fall, it becomes increasingly difficult for local media to finance the production of local news and pluralistical and media contents by themselfs. At the same time, public funding has not increased enough to cover losses on the commercial revenue side.

As a result, local media are increasingly relying on financial arrangements with local governments. These, often completely non-transparent “advertising” transactions, sacrifice media independence in exchange for postponing bankruptcy. In the past year, journalists in local media in our countries have been censored and lost their jobs, as was the case when four journalists from Istarski glas (Glas Istre) were fired due to public disagreement with the editorial policy of the city authorities.

Trade unions and associations have repeatedly asked the government to change the existing model of financing local media, according to which the local government directly selects the media to which it will allocate public money and decides on the amount of support. Such a funding model brings local media into a relationship of dependence by the local government holders, whose work needs to be critically reviewed.

Advertisers may not have proven to be the best allies of media integrity, but for better or worse, advertising revenue has supported journalism for the longest part of its history. But, of course, this is less and less the case. Recent reports reveal that revenue from digital ads is growing even during a pandemic. The transition from general advertising from the previous period to targeted communication based on personal data for settlement purposes indicates structural changes that are unlikely to be reversed. Most of the billions are appropriated by just a few companies, sometimes called digital oligopolies, without much zeal to spend on professional journalism.

The worst blows to the structural crisis of the media economy have been suffered by the weakest in the media ecosystem: journalists, especially in the local media. It is as if, in addition to the pressures of politics and crime, they need another open front. Media owners, who at least provided institutional and legal support to journalists in better times, are now turning their backs on “content producers”. This is especially evident in the context of local media and relatively small economies, such as Croatia, Serbia, Bosnia and Herzegovina, Slovenia … where media owners are increasingly seeking various informal or formal agreements with local politics.

At the same time, there are several initiatives for a fairer tax system that would address the problems of public revenues lost due to digitalization. Unfortunately, no one recognizes the need to return part of that to journalism – states the European Federation of Journalists.