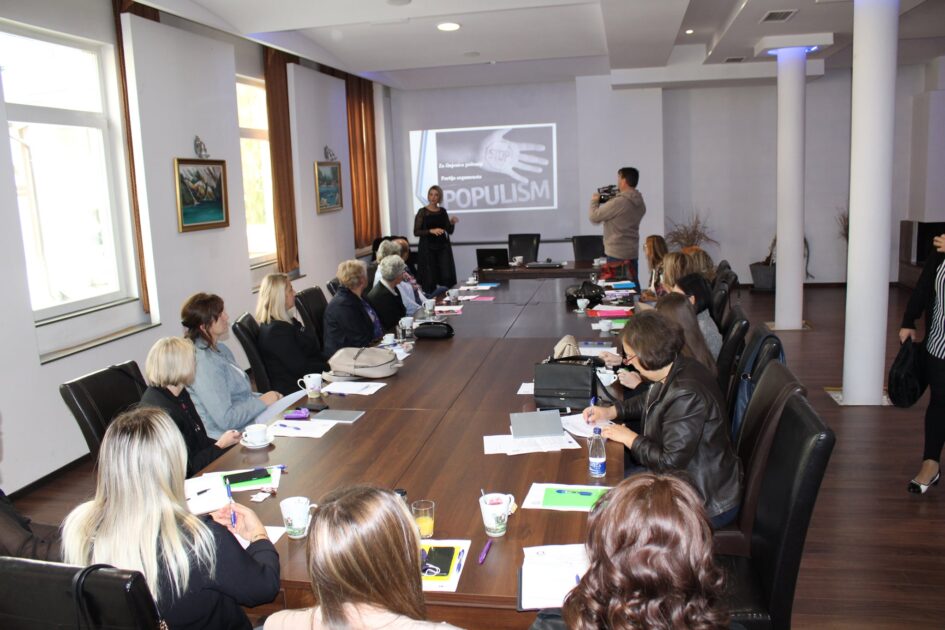 Goražde / Foča, 27.09.2021.- Organized by the women’s association “SEKA” Goražde, two workshops on media literacy were held in Goražde and Foča entitled “Arguments in the virtual world – For better media literacy of the community!”. The participants of the workshops were journalists, representatives of civil society organizations, educators and citizens from Goražde, Foča FBiH, Rudo and Višegrad.

The trainers at the workshops were experienced journalists Elma Kazagić, Aleksandra Janković, Elvira Aganović and Igor Janković, who introduced the basic concepts of media literacy to the workshop participants through concrete examples. Through a special exercise, participants processed and gave examples of argumentative performances on the one hand and populism on the other. The lecturer at the workshops was also IT expert Ahmet Hadžiahmetović, who spoke on issues of Internet security and information protection.

After the workshop, Olivera Stanković, a participant in the workshop from Television Rudo, said that the trainers had excellent presentations and that the workshop was successful. She pointed out that the binding of the media is of great importance and that such activities are desirable because they contribute to the binding, getting to know and exchanging experiences in the work of journalists.

According to coach Elma Kazagić, media literacy is a very important topic because we have growing trends of hate speech and populism on social networks and in the media. “Politicians usually do that, but there is no lack of populists in other segments either. That is why we will discuss arguments, information, misinformation, hate speech and fake news at the workshops, and I am very glad to see the participants who arrived here today from all over the region. “

The workshop in Foča gathered young participants from Foča and Goražde. Topics of argumentation, cyberbullying, protection of privacy on the Internet were especially treated, and the focus was on practical work and simulation of media appearances. Young people presented examples of hate speech, argumentative information and misinformation, and the material will be used to create a joint video from the workshops.

The participant in the workshop, Arijana Nevisinjac, thinks that as a student of journalism, her participation in such a workshop is important to her. “This is my first time participating in a workshop like this. What left a special impression on me were the lectures of experienced journalists and experts and the exercises we had, the application of what we talked about in practice. Today, when we have a flood of different information in the online sphere, it is very important to recognize fake news, misinformation and populism. “

As part of the project, two more workshops are planned to be held in October in Rogatica and Visegrad.

The project “Arguments in the Virtual World – For Better Media Literacy of the Community!” Is funded by the “Small Grants Program” within the project “Free Media, Free Society”, implemented by the BH Journalists Association in cooperation with the Association of Electronic Media in BiH (AEM BiH ), with the financial support of the European Union.