BH Journalists seminar: Are politicians and the media the main “culprits” for spreading hate speech in BiH? 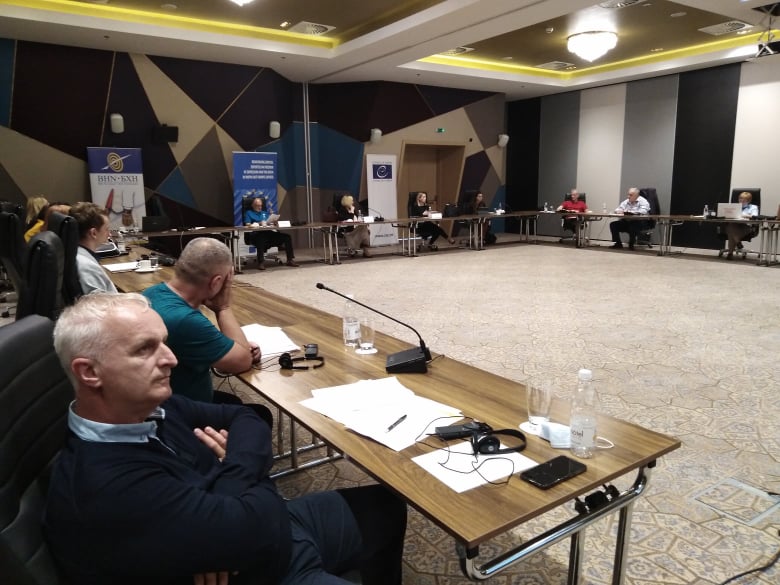 Sarajevo, June 10, 2021 – The main sources of hate speech in BiH, but also in the world, are politicians – not the media, to whom this label is often unfairly “glued”. Bosnia and Herzegovina should adopt laws banning hate speech at all levels of government, but also create a systemic strategy against this kind of speech, with a special focus on the media and education system – it was pointed out during the first day of a two-day seminar “THE ROLE OF MEDIA AND JOURNALISTS IN PREVENTION AND REDUCING HATE SPEECH IN MEDIA CONTENT AND THE INFLUENCE OF HATE SPEECH ON PUBLIC OPINION “organized by the BH Journalists Association, within the project of the Council of Europe and the EU – Freedom of Expression and Freedom of the Media in Bosnia and Herzegovina (JUFREX).

The president of BH Journalists Association Marko Divković and Secretary General of BH Journalists Borka Rudić pointed out that the main goal of this seminar is to contribute to more efficient and consistent application of Article 10 of the European Convention on Human Rights which refers to the protection of freedom of expression, but also to the protection of victims of hate speech.

– The battle for free speech is permanent and I believe that we will never be able to say that it is over. Our social reality in BiH is extremely contaminated with hatred induced mostly by political leaders and all this is affected by our legislation, or rather, standards that are not applied. The worst realization is that we have an unlimited digital sphere in which there are no sanctions against hate speech – said Divković.

International expert of the Council of Europe, lawyer Jonathan Price analyzed several examples of female journalists around the world who have been exposed to hate speech in various situations, with a particular focus on the negative trend of increasing gender-based hate speech.

– Hate speech is the enemy of freedom of speech and the old norms and values ​​related to freedom of speech will disappear, not only because governments apply inadequate solutions, but also because of a barrage of fire that aims to silence the voice of journalists. There is a huge problem related to hate speech towards journalists in situations where hate speech is directed towards a particular person. Investigative journalists around the world are exposed to massive online attacks. Most importantly, all cases of hate speech must be investigated and prosecuted. If that does not happen, the escalation of hate speech can lead to extreme situations, even deaths – said Price.

Delegate in the House of Peoples of the FBiH Parliament prof. dr. Damir Marjanović, who is also the proposer of the Law on the Prohibition of Hate Speech in FBiH, said that the majority of BiH politicians talk about how they want to listen to professionals, but despite that, for years they have been refusing to pass this law.

– The adoption and implementation of quality laws can prevent hate speech and not just “cure” its consequences. Of course, the law cannot solve all problems, especially if we are not used to our young people respecting the laws through the education system. It will be very important in the future through education reform to pay attention to the issue of hate speech – said prof. dr. Marjanović.

Nina Kisić and Sara Arslanagić, members of the legal team for drafting the Law on the Prohibition of Hate Speech in Canton Sarajevo, spoke about certain provisions of the proposed law. They especially emphasized the problem of the impossibility of obtaining police protection if someone is a victim of threats.

– We have defined several groups of persons as protected categories in the law. The penalties prescribed in this draft law fit into the ratio of the penalties of the existing Criminal law of the Federation, but if hate speech leads to consequences such as physical violence or riots, significantly higher penalties are envisaged. The point is to establish a balance between freedom of speech and what constitutes as hate speech, that is to define where freedom of speech ends and where hate speech begins. It is our idea for this law to be adopted at the level of the entire BiH, but it is important to take at least the first step and adopt the law at the level of the Canton – said lawyer Kisić.

Azra Maslo from the Communications Regulatory Agency (CRA) emphasized that hate speech is absolutely forbidden in all program contents.

– We are currently in the process of harmonizing our rules with EU regulations and one of the provisions concerns the ban on content that incites terrorism. However, the question arises as to how the media can inform about content that qualifies as hate speech, because it can also represent legitimate information – for example, if it is a statement by a politician. From the regulatory point of view, the editorial responsibility and how the media approached the publication of such content is crucial – whether it only transmitted information or in some way took on the role of instigator of such content. I think it is very important to make a systemic strategy to fight hate speech – Maslo explained.

She added that fines for hate speech in electronic media in BiH are from 5 to 150,000 BAM and that most often hate speech concerns the incitement of religious and national hatred, the LGBT population, and more recently the migrant population.

– Any citizen can contact VZŠ and file a complaint if they think that an article is written unprofessionally. The council then mediates between the citizen and the media seeking the right to reply, deny or apologize. However, VZŠ does not have the authority to penalize, suspend, license or establish media outlets. We are currently trying to strengthen cooperation with media editors and make them aware of how important self-regulation is – said Burek.

Speaking about comments on the web portals, she said that every media outlet should consider a system of filtering and restricting comments, and some online media outlets have decided to ban comments altogether because of hate speech.

BiH Human Rights Ombudsman Jasminka Džumhur said that it is very important to define what hate speech is and only after that to talk about international standards and obligations.

– The first obligation would be to effectively prosecute those who have committed a crime of hate speech. The problem is that the degree of endangerment of one’s safety is arbitrarily assessed. That is why it is necessary to change the criminal legislation and define that the threat that makes a person feel threatened is enough for the competent institutions to act – said Džumhur.

Hate speech is a legitimate goal to restrict freedom of expression, Džumhur concluded. International standards insist on the prohibition of hate speech and the dignity and equality of every individual are the basis of all international documents.