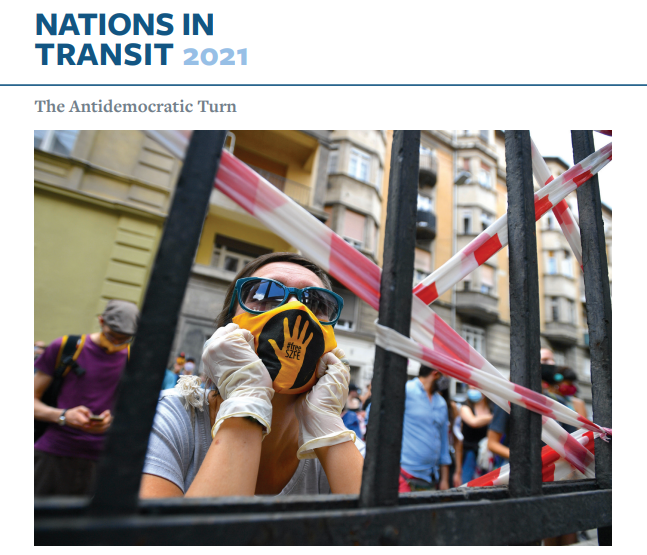 Sarajevo, April 29, 2021 – In most countries of the Western Balkans, democracy has declined over the past year, as attacks on democracy have intensified across Europe and Eurasia, the NGO Freedom House said in a report “Nations in Transit 2021”.

Albania, Montenegro, Kosovo and Serbia have declined in their ratings of democracy, while progress has been made only in Bosnia and Herzegovina and Northern Macedonia, according to a US-based NGO report.

As it is stated, in BiH, after ten years of regression or stagnation, last year for the first time there was an improvement with the growth in the democratic score from 3.32 to 3.36 due to the progress in the field of Local Democratic Governance. On the other hand, BiH received the worst score in the area of ​​National Democratic Governance (2), while it received the best score in the area of ​​Electoral Process and Civil Society (4,5). The report mentions the fact that the purchase of medical ventilators in BiH is entrusted to a fruit growing company, which underscores corruption in the country.

There were no changes in Croatia, but there was a deterioration in Slovenia, which is the only one in the region classified as a “consolidated democracy”. 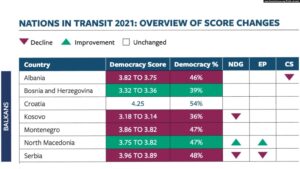 The section of the report on media freedoms states, among other, that pressure on independent media and investigative journalists has increased in much of the region over the past year.

In a report covering 29 countries of the former Soviet Union and Eastern Europe, Freedom House points out that attacks on democratic institutions are spreading faster than ever before in Europe and Eurasia and are growing into a challenge to democracy itself. Of the 29 countries, 18 had a decline in the democratic score, while results improved in only six countries, Freedom House points out, adding that in five countries there was no overall change. This marks the 17th consecutive year of the overall decline in “Nations in Transit” reports, making the number of countries considered democratic the lowest in the history of publishing that report.

According to Freedom House, all Western Balkan countries are classified as a “gray zone” of hybrid regimes between democracy and autocratic systems. Ruling politicians and parties are spreading anti-democratic practices across the region, from Central Europe to Central Asia, Freedom House reports.