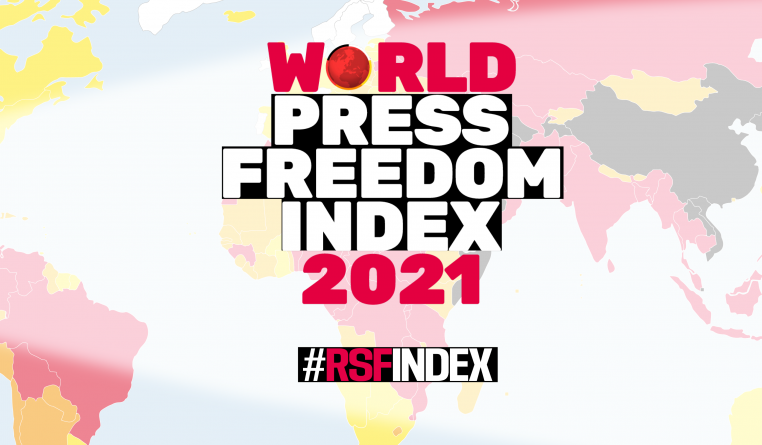 Sarajevo, April 28, 2021 – There has been a dramatic decline in media freedom since the beginning of the COVID-19 pandemic around the world, Reporters Without Borders (RSF) announced in its annual report, the World Press Freedom Index.

The new World Press Freedom Index, published on April 20, assessed the situation in the media during 2020 in 180 countries, and concluded that 73 percent of them have serious problems with media freedom.

The report ranks countries in six areas according to the ranking of the media freedom index, where Norway ranks first with an index of 6.72, while Eritrea with an index of 81.45 is in the last, 180th place.

Among the countries in the European Union / Balkans zone, Croatia has advanced by three places – it is in 56th place with an index of 27.95, while last year it was in 59th place. Bosnia and Herzegovina is in 58th place with index 28.34, same as the year before.

The report for BiH highlighted the political influence on the media.

-Manipulation of the media for political purposes continues, especially in the public broadcast media but also in privately-owned media (and online media in particular). Although implementation of the defamation laws has progressed, they continue to have a self-censorship effect on journalists. Nonetheless, investigative journalism plays a major role in society and several online media outlets have exposed significant cases of corruption. Yet no legislation has improved the overall environment for journalists, no law on online media has been promulgated, and no progress has been made on media ownership transparency. The Covid-19 pandemic undermined and threatened press freedom in 2020. The government held press conferences without journalists being physically present, and officials avoided answering critical questions about the relevance of the government’s measures. Some authorities and state institutions directly obstructed journalists’ work, and in some cases, they even accused journalists of “inaccurate and malicious reporting” – states the report of RSF.

The countries of the Western Balkans are in the orange zone, which has been assessed as a “bad” state of media freedom.

Europe and America (North, Middle and South) remain the most favorable continents for media freedom, although some countries on the South American continent have seen the largest deterioration in regional violations (an increase of 2.5 percent). Europe has seen a significant deterioration in its ‘abuse’ indicators, according to the report, with violence more than doubling in the European Union and the Balkans, compared with a 17% deterioration worldwide.

The World Press Freedom Index for 2021 compiled by Reporters Without Borders shows that journalism, “the main vaccine against the disinformation virus,” according to the report, is completely or partially blocked in 73 percent of the 180 countries and territories ranked by the organization. Restrictions on media freedoms are present in 59 other countries, representing a total of 73 percent of rated countries.

“Journalism is the best vaccine against misinformation. But unfortunately, its production and distribution are too often blocked by political, economic, technological and sometimes even cultural factors. In response to the viral nature of cross-border misinformation, on digital platforms and social networks, journalism is the main way to ensure that the public hearing is based on a diverse set of established facts”, RSF Secretary General Christophe Deloire said.