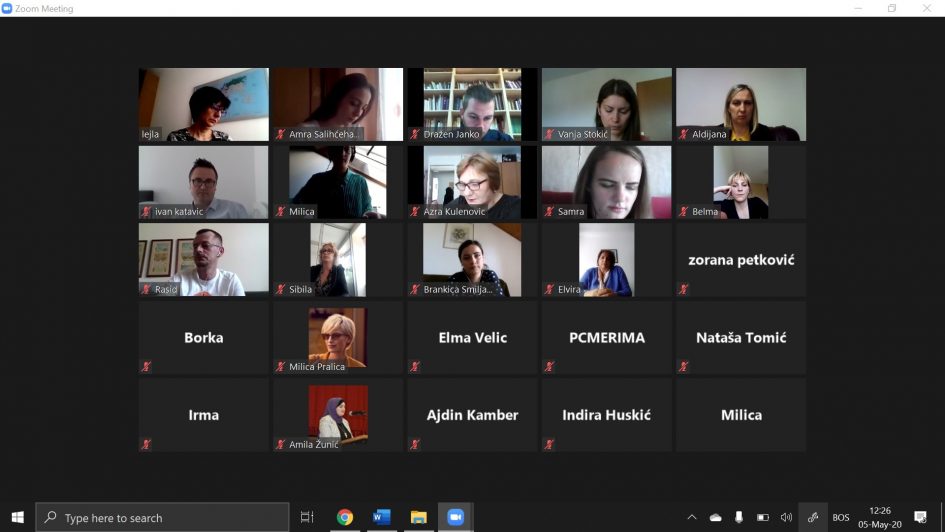 The webinar was attended by 30 journalists from all over Bosnia and Herzegovina, and the educators were prof. dr. Lejla Turčilo and prof. Dr. Belma Buljubašić from the Faculty of Political Sciences in Sarajevo, and Lea Čengić from the Communications Regulatory Agency.

During the training, participants agreed that the media report on violence against women when the act of violence occurs or when it is a date, and that they very rarely create texts that analyze violence as a problem, providing coercive and educational information.

Porf. Dr. Lejla Turcilo says it would be crucial for the media to have journalists who specialize in this area, but that this is hard to expect.

“What is important is to always consult experts during the creation of the story, because this is a very important and sensitive topic. The use of appropriate methods in conversations with victims of violence is very important, in order to avoid further traumatization, and responsible and sensitive “packaging” of the story that will explain the broader context and point to social and institutional responsibility for violence prevention and severe sanctioning of perpetrators. the two most important tips for the media “, believes Turčilo.

She adds that the ultimate outcome and goal of media activity in this field and the institutional response to gender-based violence is to always have a zero number of cases of violence.

Aldijana Purić, editor-in-chief of Radio Velika Kladuša, says that educational workshops / webinars are extremely important for media professionals, precisely because it is clearer to them how to approach the topic of violence and how to report more gender-based violence.

“I agree with the opinion of the participants in the webinar that the problem of gender-based violence is not talked about enough in the media and we, as media workers, should certainly work on it, as far as possible, to talk about it more openly and more often. I consider it very important to continuously educate journalists on reporting on this and other topics. I think that an online workshop is a good way to include more journalists and editors in the training, who, for example, are not able to attend workshops organized under normal circumstances, “said Puric, adding that although the webinar can not completely replace workshops that involve physical the presence of participants, which enables better discussions, still has its purpose.

Rashid Krupalija, a journalist with the raskrinkavanje.ba platform, is of the opinion that the media in Bosnia and Herzegovina report on gender-based violence more often than before, partly thanks to education such as this webinar. “We are still approaching the ideal approach to this problem, whose roots are in a society that favors men, and the manifestations in every sphere of life. In addition to the tools we have so far, education of this type could be key to the path to reporting on gender-based violence that will be part of the solution to the problem, “said Krupalija.

The webinar was held within the project “Building a fairer, more equal and integrated society that guarantees women in Sarajevo personal integrity and the right to life without gender-based violence” implemented by the BH Journalists Association in cooperation with Medicus Mundi Mediterania from Barcelona.