Journalist Vladimir Kovačević: It was a classic fight to preserve my head, I did not even get to feel the fear 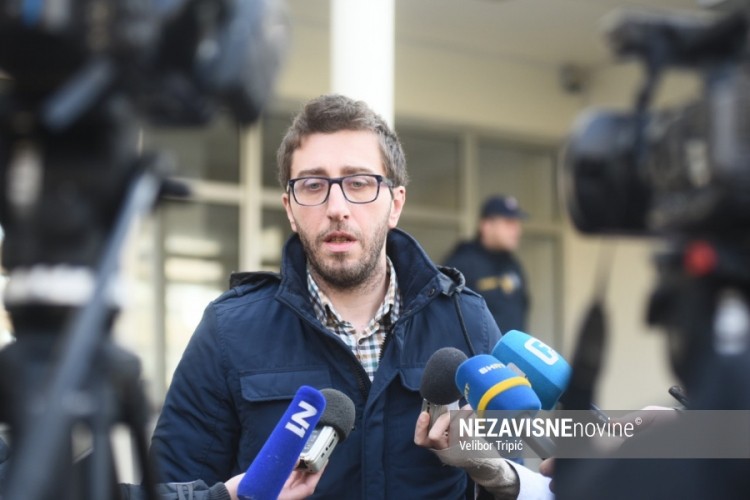 BANJA LUKA, 21.02.2019.- Journalist of BN TV Vladimir Кovačević said today, at the beginning of the trial before the Banja Luka District Court, that during the attack on him on the 26th of August last year, he though the attackers will murder him.

The trial for one of the attackers – Marko Čolić (37) started today, while the second-accused in this criminal offence Nedeljko Dukić in in the run. An international warrant after him was issued.

In the courtroom Kovačević told that before he was attacked in front of the building he lives in, he spotted two persons, with hoods on their heads, but their face was visible when they started moving towards him.

– It was not until I heard the sound of striping the sticks, I realized what was happening. But then it was already too late – Kovacevic said.They hit him, he says, and while he was still on his feet, only in the head. During the attack, he tried to partially defend himself, and he did not, he said, even get to “feel” the fear, reports Fena.

– I just thought ‘what’s going on, they’ll kill me.’ It was a classic fight to save my head. I started screaming … I felt the blood. They entered the car. I tried to see the plates, but I do not succeed because my glasses fell, “Kovačević said.

He added his ear was almost broken, as well as that his head was sewed hospital on several spots, and that he still had headaches that he had not previously had.

Čolić was identified in the police, while the motive of the attack is not yet known.

The indictment alleges that Kovacevic was attacked on August 26 at around 20.40 in front of his building in Banja Luka.

Specialist for forensic medicine Milan Srdić confirmed that Kovačević had suffered a severe injury of the forearm of the brain tissue, as well as several other minor injuries on the body.

– He got at least four strokes in his head and three on the body, with a strong swing of arm in which the subject matter was – said Srdic.

Expert Zoran Obradovic, head of the DNA laboratory at the Institute of Forensic Medicine Banja Luka, spoke about the DNA traces found at the site of the event.

Čolic’s trail was found, on the stick handle, and he underlined that, there is no possibility that Colic was never in contact with the object, and that his trail was transmitted by someone there.

The judges warned Colic’s attorney Gordan Jovicevic, on several occasions for the way he talks to the witnesses and to the judges.

Jovišević and Čolić today requested his custody to be abolished and that he continues to defend himself from outside.

– I buried both father and mother while in custody. I didn’t cause any problems. I do not feel psychic  good. I don’t sleep – said Čolić, who was ever warned by the President of the Judicial Council Branimir Jukić at one point “not to smile” while Kovačević testified, on what he answered saying that he was “constantly in good mood”.

The Prosecutors objected to the request for termination of custody, and the Trial Chamber will make the decision on custody subsequently.
Oslobođenje, Banja Luka, 21/02/2019