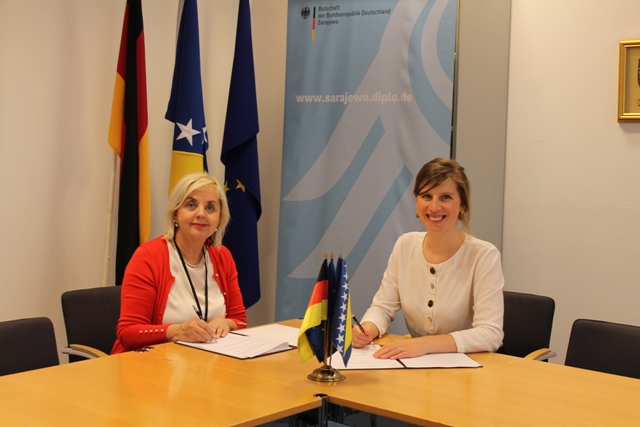 SARAJEVO, 09.04.2019. –The head of the Public Relations, Culture and Protocol Department of the Embassy of the Federal Republic of Germany in BiH Ellen Harte and the secretary general of the BH Journalist Association Borka Rudić signed an agreement on financial support for improving the capacity of the Free Media Help Line for recording, monitoring and reporting attacks, threats and other forms of violation of the rights of journalists and media freedoms in BiH.

The main goal of this project is developing unique methodology and other systematic solutions for monitoring court proceedings in favor of or against journalists and media outlets, and institutional measures and proceeding of competent state and independent institutions in protection journalists rights and media freedoms. It is planned to be established a comprehensive, fast and safe system of information and mobilization of the state institution and professional media organizations for protection journalists in the cases of violence, a criminal offense against journalists and other forms of endangering their rights and safety by the end of 2019.

“Across the world, Germany is strongly committed to the safety and freedom of media- that is, for example, one of our’s priorities in United Nations Security Council. We are glad that we can contribute to the protection of media freedom in Bosnia and Herzegovina, through this project, because the freedom of media is the base of democratic society. Citizens should have an opportunity to be extensively informed and to build their own opinions. This includes the protection of journalists in carrying their tasks as also the illumination of attacks on journalists. And this is exactly focused on this project.” said Ellen Harte.

“By strengthening the capacity of the Free Media Help Line and consulting with the responsible institutions of the state and the judiciary, we want to create a system of monitoring media freedom in BiH that will be accepted as a valid and reliable way of recording all cases of violation of the freedom of expression and freedom of the media, including measuring the effectiveness of the prosecution and courts in the legal protection of journalists and the media” said Borka Rudic, recalling that the current record of the Free Media Help Line shows that less than a third of attacks on journalists are solved in their favor, in a way that provides professional and human satisfaction. “The new monitoring system should prevent any attempt to hide, minimize or not prosecute attacks on journalists, which we have witnessed countless times to now” Rudic concluded.

This project should result in the establishment of an inter-sectoral group for the monitoring of media freedom in BiH, as an independent body that will be able to monitor media freedom in BiH in the long run and propose effective measures for their improvement and protection in accordance with EU standards.

The project is supported by Germany, and the total value is about 30 thousand euros.
BHN, Sarajevo, 09/04/2019