Nadezhda Azhgikhina: “Let’s remember that journalism is a public good, we need this ideal to survive” 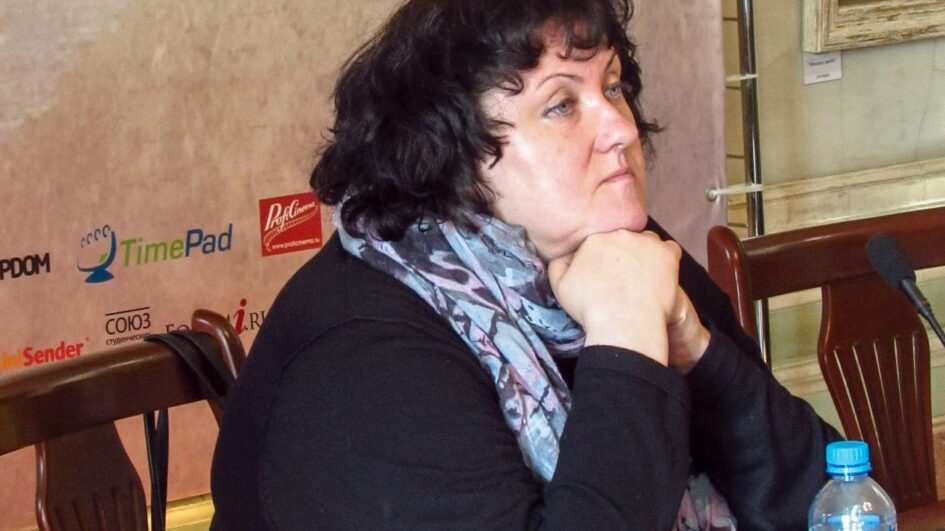 As the war in Ukraine is escalating, we interviewed Nadezhda Azhgikhina, Russian journalist, director of PEN-Moscow, and former Vice-President of the European Federation of Journalists (EFJ) from 2013 to 2019. Azhgikhina is an experienced journalist, a true fighter for media freedom, a writer on human rights, gender equality, contemporary journalism and culture. She has delivered lectures at Moscow State University, Columbia University (USA), Tampere University (Finland), Sodertorn University (Sweden), London School of Economics (Great Britain), and Harvard (USA). From 2014 to 2016, she was the Russian coordinator of Dialogue of professional organisations of Ukraine and Russia under the umbrella of the OSCE.

As a journalist, committed to ethical values, how do you experience the current context of this war in Ukraine and its consequences for journalists and media on both sides of the border?

It is a real disaster. Nobody expected this situation in Russia, and as I understand, in Ukraine as well. People thought it was just competition and threats. Aggressive rhetoric was ubiquitous, it was scary. Journalists contributed a lot to escalation, editors pushed them to use more and more aggressive language. There was almost no space for real analysis and balanced information, everybody used opinions instead of facts, often without any proof, it was a clear picture of the “post-truth” media landscape. There is no doubt that the Covid-19 and its consequences, permanent stress, and crisis had an impact on the situation. In Russia and Ukraine especially, the media was writing about possible war as a real option, and most of the media participated in the mainstream political agenda. In both countries, opponents of the official militant trend faced restrictions.

It started a long time ago, for many years. Since 2014, Russian media and journalists supporting Ukrainians and hesitating in governmental official positions about Crimea and Donbas faced court cases, censorship, and restrictions. Media lawyers counted more than 30 new legal initiatives and legal regulations restricting the media field and freedom of expression. Many media and even journalists in person have been included in “foreign agents” lists, several media were banned, bloggers and Internet users as well. It is remarkable that restrictions in Russia have been inspired by the Western restrictions for Russian state-owned media, first of all, Russia Today and Sputnik. Strong attacks on independent media in Russia started immediately after including RT in the US into the US foreign agent list. Every new ban on official Russian media in Europe inspired new attacks on free media and HR groups in Russia. The recent banning of RT and Sputnik in Europe as well.

So we could face total eradication of independent media in Russia soon, especially after these unprecedented economic sanctions. The sanctions never worked against Russian officials or oligarchs, on the contrary, they supported them and united ordinary people around the power and inspired by hunting, blaming and punishing all independent voices in Russia with the support of the general public. In Ukraine, Russian language media or media presenting any sympathy to Russia have been restricted for many years, some were closed. The journalist community was polarised in both countries. In this situation, ethics and professional standards are first to suffer.

I should say that another dramatic point in protecting journalism as a public good was the crisis of the profession in the West and the “Russiagate” trends in the Western media. Russians were “toxic” by origin, people had no arguments for it, and editors simply followed the trend. With the Americans in the lead. For Russian liberals and journalists, who for decades had looked to the US and all quality Western media as their model, it was a dramatic frustration. Today, during the “special operation” in Ukraine (this is the official definition in the Russian media since the words “war” or “invasion” are officially forbidden for use), ethics are almost totally forgotten. The propaganda on TV channels has nothing to do with ethics and journalism, it is full of aggression.

The journalist community in Russia is divided, and those who are against the war are not united either. Some think that Ukraine is like a holy state with holy leaders, and those who hesitate are attacked. Other journalists support the special operations. And some Ukrainian journalists blame all Russians without question. Some colleagues call for more and more sanctions against Russia and war on Russia… It is a total disaster.

You participated in the dialogue between Russian and Ukrainian journalists’ organisations launched in 2014 by the OSCE. The dialogue placed great emphasis on the fact that journalists should never become soldiers in an information war. Have these recommendations been forgotten today?

I was happy to take part in the dialogue for four years, and I am happy that we managed to discuss professional and ethical issues, publish handbooks, produce films and establish a real dialogue. The title of our project was Two Countries, One Profession. It was a real grassroots initiative, and I am proud that I took part in it. We came first to EFJ and IFJ headquarters in Brussels in spring 2014 and started with ethics and joint decisions of two Press Councils. But the main result is that we rescued 8 people from detention, they write in books and say in films that they are alive because of our joint demand for their release. This is the most important, and it works. I am glad that we are in contact with our Ukrainian counterparts. I do believe dialogue would be active again. Unfortunately, it was frozen in 2018. We need real dialogue between people and journalists in the future.

Do you think it is possible to establish a dialogue again today between Russian and Ukrainian journalists’ organisations, around these professional values?

I am sure it will be re-established sooner or later. It may be a long way. But it is very important.

What can European journalists’ organisations and their federations, EFJ and IFJ, do to support independent journalists in Ukraine and Russia?

Just answering your question today (on 1 March) I got two pieces of news. One from colleagues, telling that a new legal initiative of the Russian Parliament will establish a new amendment on Fake News Law about fakes on military operations. Charges will be up to 15 years in prison. And second, from a former student of mine, she applied for a fellowship in Europe and got the best result, but got a message that they could not invite her because she was from Russia. It is very, very sad.

And one more – somebody suggests excluding all Russians from professional and other International bodies. It is the same as sanctions that are already destroying Russian civil society and can end it totally. It is like a death sentence for independent voices and independent media in Russia. All honest journalists, Russian, Ukrainian, French, German have the same blood and same values, which is important to have in mind.

I do hope European journalists could resist all forms of discrimination, and support joint efforts to better communication of all media professionals standing for ethical and professional standards, for peace. I do believe in the solidarity of journalists from all countries, our commitment to professional duty, to the good. EFJ helps a lot in that. EFJ could do a lot in the future, and overcome dark and sad moments, to support our professional values. It is important for journalists, it is important for our audience as well. We should not let the new Iron Curtain appear in Europe.

As soon as the EU does not issue visas for Russians, it is important to give visas for journalists for professional meetings and discussions.

Journalists are now forced to cover a conflict sometimes without proper training or preparation. What would be your message to the journalists covering the war at the moment?

I will repeat the recommendations of my colleagues from Russian and International media covering conflicts. Try to tell the truth, report what you witness, and check everything, all information carefully, try to be independent even from your emotions, and try not to make any harm with your reporting. Consult with experienced colleagues, experts, and therapists before dangerous trips. In any case, do not report about things you are not sure about. Unfortunately, not so many independent journalists are working in the field, most of the media use the same material from big agencies. Try to find independent resources, check many times with different resources all sensitive or shocking information. International journalist networks, like the Ethical Journalism Network and others, say that today the most important is fact-checking. Remember that journalism is a public good (ideally), but we need this ideal to survive.