Monitoring local media in BiH: Politicians must understand that the media is not their “service” 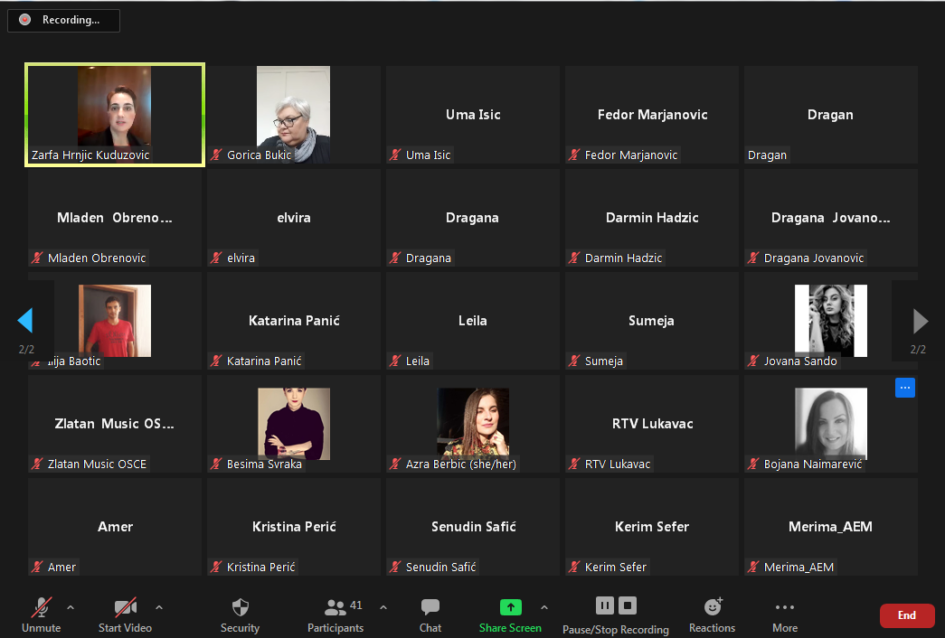 Sarajevo, October 26, 2021 – The public interest must always be in the forefront and it is necessary to work on thematic research stories with a larger number of interlocutors, but also to better protect journalists in local media, improve working conditions, and work with local officials to raise awareness that local media are not their property – are some of the main recommendations for monitoring media content “Local media – quality of media content and information for citizens, pluralism of opinion and diversity of information sources“, the results of which were presented today in the organization of the BH Journalists Association.

According to the words of the Secretary General of BH Journalists Borka Rudić, this is a presentation of data from the second phase of the research that was created within the project “Free Media for Free Society”. The main goal of the research was to compare how local media create their content and how much they support the needs and interests of citizens in local communities, as well as whether more sources of information are used so that citizens can make their own judgment about current events and phenomena.

The President of the BH Journalists Association Marko Divković, emphasized that the role of local media cannot be bypassed, despite the fact that colleagues working in these media are far more under pressure from government representatives and corporations. Elvir Švrakić from the Association of Electronic Media has the same opinion, who said that being an independent journalist and maintaining the integrity of the profession in the local media is very difficult, given the fact that these media are financed from the budget.

The author of the research, prof. dr. Lejla Turcilo from the Faculty of Political Sciences in Sarajevo believes that the role and importance of local media are often neglected. “Through this research, we followed the work of local media for a year, and in the end we received a very extensive report of about 70 pages. The goal was to check and analyze media content to check what kind of content it is according to certain parameters, how much the standards of the profession are respected and how much reporting is in line with the public interest. In addition to the monitoring itself, this report included interviews with journalists and editors of local media“, said Turcilo.

The analysis of a total of 948 contents in 50 local public and private media showed, among other things, that in the second phase of the research, local policy in media contents was somewhat less present than in the first phase.
“At the same time, given the situation with the pandemic, we had a slightly larger number of topics related to health. The problem is that the number of topics of public interest has significantly decreased compared to the first phase of the research, and the number of those topics that are difficult to assess whether they are of public interest or not has increased, especially when it comes to the way they are topics presented. The number of contents in which reporting is reported in such a way that there are no interlocutors in the stories at all – e.g. a press release is broadcast and then the journalist interprets it in his own way. There is still a very small number of media that include three or more interlocutors in their content.Very often the problem is that journalists cannot find quality interlocutors for a certain topic or they do not want to speak for the media.” said Turcilo.

She added that it is positive that the number of experts from certain areas in the programs of local media has significantly increased in relation to the provision of media space to local officials. The problem with most web portals is still that local topics of public importance are treated mostly superficially, while some “light” content gets a lot more space.

“Often when the interlocutors are not interested in talking about a topic, the media transmit content from social networks, Facebook statuses and the like, and that is how that copy-paste content is created instead of author’s stories. Respect for professional standards is still very present and some basic, essential standards of the profession are respected in most content “- says Professor Turčilo.

Professor Zarfa Hrnjić Kuduzović from the Faculty of Philosophy in Tuzla said that the results of this research were worrying, but also expected. “The environment in which journalists work is very important for quality journalism. The problem is primarily the political influence on the media and this generates a decline in quality. Local authorities perceive the media as their megaphones, not as a service to citizens, which they should be. Politicians are the ones who impose the agenda on the media and the topics that are covered, and in smaller communities this is especially pronounced. There is also unfair competition in which the media work, especially when we talk about online media, which are a significant source of information for citizens, and are practically not subject to any rules “, says Hrnjić Kuduzović.

She emphasized that the solution is to find models for more stable media financing, as well as to introduce more transparent allocation of grants according to clearly defined criteria from the budget to local media and regulation of online media.

The editor of “Naše riječi” from Zenica, Elvira Šaćirbegović, is of the opinion that the limited space in the print media often limits the number of interlocutors, as well as that the daily pace of work often does not allow journalists to engage in investigative journalism. Dragana Jovanović from Srebrenica believes that in the last two or three years there has been an increased interest in the work of local media and their cooperation with larger newsrooms. She added that it is necessary to change the perception of local authorities that the allocation of funds to the media does not dictate which topics the media will deal with.

Participants in the discussion concluded that much more needs to be said about the protection of journalists’ rights in local media, given the fact that journalists from local communities rarely use protection mechanisms, and that if one of the cases is not reported to the relevant institutions or to the Free Media Help Line there is no support from the media community. It was said that it is necessary to open discussions on models of organizing media in local communities, and establishing rules of transparency in financing public and private media, which will guarantee that these media will work in the interest and be in line with the needs of citizens in local communities.

The research was created within the project “Free Media for Free Society”, which is implemented by the BiH Journalists Association in cooperation with the Association of Electronic Media in BiH (AEM BiH), with the financial support of the European Union.