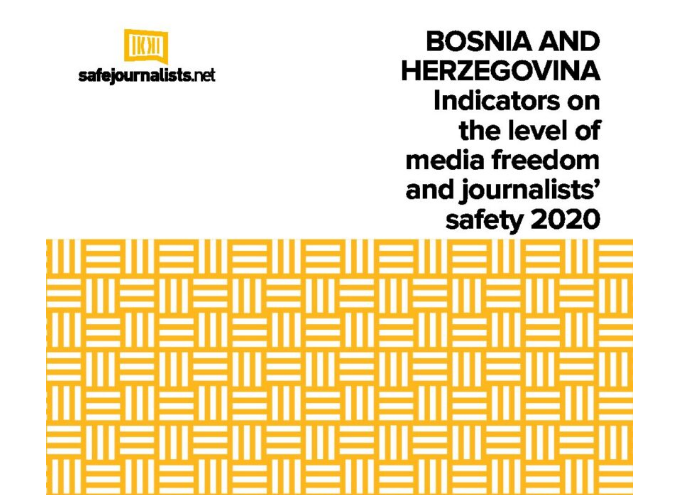 During 2020, a total of 26 cases of attacks, threats and pressure on journalists and media in Bosnia and Herzegovina were registered, including 3 physical attacks, 6 death threats and 7 attacks and threats against media outlets. The Free Media Help Line (FMHL), which operates within the BH Journalists Association, recorded 69 cases of violations of journalists ‘rights and media freedoms last year, including threats to journalists’ labor rights, mobbing, defamation lawsuits and violations of the right to free access to information – states the report “Indicators on the level of media freedom and journalists’ safety in BiH 2020”, produced within the Western Balkans Regional Platform for Media Freedom and Safety (www.safejournalists.net) and with the support of the European Union.

Last year’s survey on media freedoms conducted by BH Journalists in cooperation with the Friedrich Ebert Foundation showed that more than 70% of BiH citizens believe that media freedom in the country is not present at all or is partially present, and more than half said that political dependence is fundamental obstacle to the work of the media in BiH. The poor economic position makes journalists susceptible to political influences and does not motivate them to take a professional approach to work. Many have below-average salaries and irregular incomes and are not paid regular pension and health insurance contributions, and sign contracts with employers on a monthly basis or for a slightly longer period. All this creates a feeling of constant economic insecurity and concern and in many newsrooms it directly leads to (self) censorship, selective publication of information and various types of pressure and mobbing.

During 2020, the most numerous were cases of threats and intimidation of journalists as well as various forms of pressures, which often came from representatives of government institutions. When it comes to threats and harassment, the number of cases of threats to journalists through social networks, hate speech and online violence has increased. In most such cases, the attackers will not be sanctioned. The passivity of institutions, above all prosecutors’ offices and courts, opens space for new attacks and encourages those who believe they can commit violence without punishment.

The report in English is available HERE.