BH Journalists: The verdict against the Žurnal magazine directly endangers the freedom and work of the investigative media 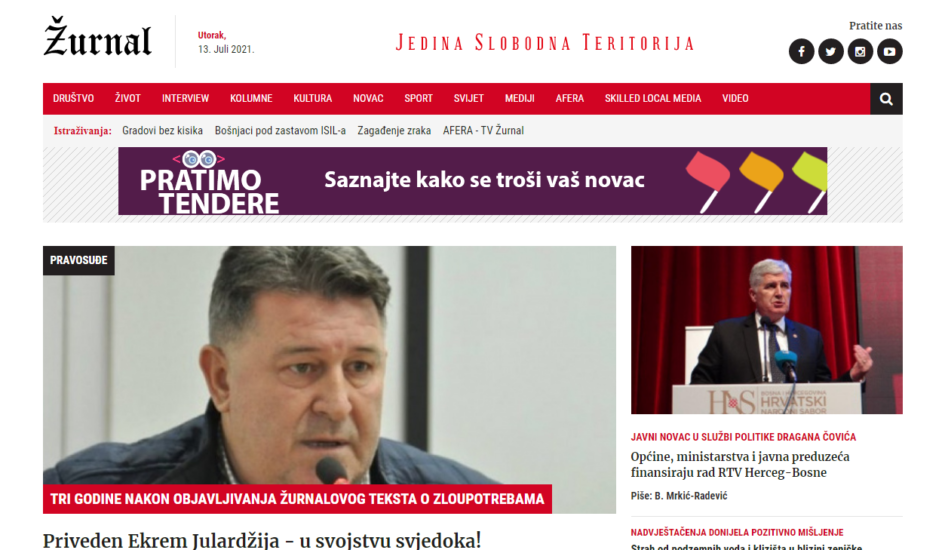 Sarajevo, July 13, 2021 – On July 7 this year, the Municipal Court in Sarajevo passed a first instance verdict sentencing the online magazine Žurnal and its editors Selvedin Avdić and Eldin Karić, as well as a former journalist of this media outlet Avdo Avdić on paying the total amount of more than 170,000 BAM, without interest.

This case is a defamation lawsuit filed against the editor and journalists of Žurnal by Gordan Memija and his company “FotoArt”. The subject of the lawsuit were the articles published by Žurnal in which Memija is connected with the members of the international drug cartel.

The Steering Committee of the BH Journalists Association expresses deep concern over the amount of compensation in excess of 170,000 BAM determined by the Municipal Court in Sarajevo. If the mentioned verdict becomes final, the payment of that amount could seriously jeopardize the work of Žurnal magazine and the existence of the employees of this media outlet, as well as journalist Avdić.

The Steering Committee of BH Journalists is particularly concerned that the first instance verdict and the disproportionately high amount of damages are directed against journalists and editors of the online media outlet who nurture investigative journalism, whose stories have been repeatedly awarded for research on topics of public importance, and with strong social impact. In this context, we draw particular attention to the Council of Europe Declaration on the Protection of Investigative Journalism, which calls on member states to “protect and promote investigative journalism”, respecting Article 10 of the European Convention on Human Rights, the case law of the European Court in Strasbourg and others Council of Europe standards. The member states of the Council of Europe are explicitly called upon to “prevent disproportionate, worrying sanctions”, to ensure the free exercise of the journalistic profession, not to seize professional material or search work premises, ie. not to frighten media professionals, and especially investigative journalists. Bosnia and Herzegovina, as a member of the Council of Europe, has committed to respecting all declarations on the protection of media freedom, including the European Convention on Human Rights, which is the part of the foundations of the BiH Constitution.

We remind that recently the Municipal Court in Sarajevo issued a Decision on Enforcement according to which more than 212,000 BAM were confiscated from the account of the company “Avaz-roto press” for the purpose of collecting court penalties and costs of enforcement proceedings, following the verdict on defamation lawsuit dated 2009.

These two court decisions on defamation lawsuits and with enormously high damages claims can be interpreted as a direct threat to media freedom and attempts to stifle investigative journalism, but also endanger the reputation of judicial institutions due to justified suspicions that the verdicts are politically motivated and belong to the so-called SLAPP lawsuits. Such lawsuits, with huge damage claims that are directed against the survival of the media are one of the most current issues of the media community in the European Union, but also in Bosnia and Herzegovina and the region, where the number of such cases is evidently growing.

We emphasize that there are currently close to 300 defamation lawsuits against journalists and media outlets in the courts in Bosnia and Herzegovina. More than 80 percent of prosecutors in these cases are politicians, representatives of the judiciary and other public officials.