Survey on media freedoms in BiH: Every fourth respondent believes that an attack on journalists can be justified 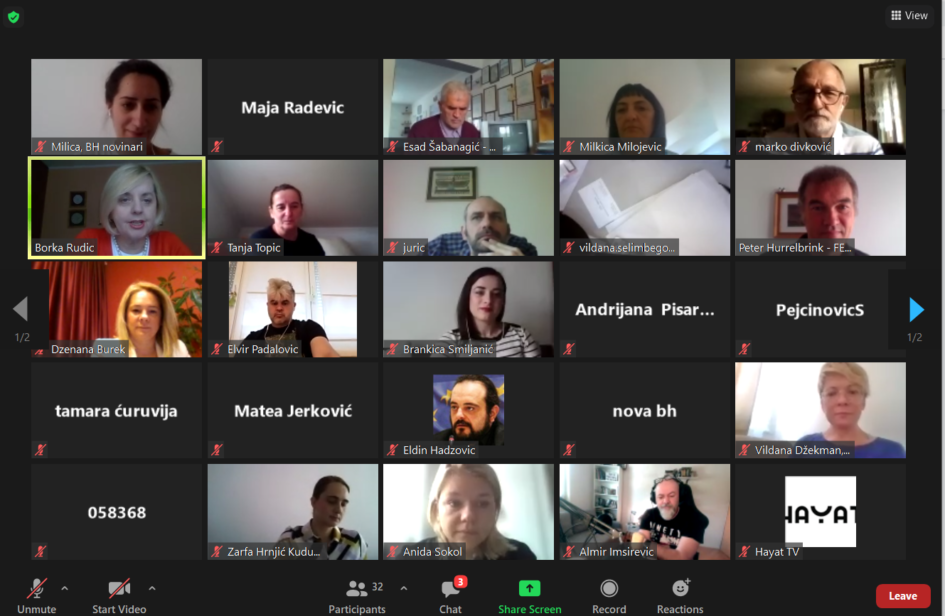 Sarajevo, May 3, 2021 – The majority of citizens of Bosnia and Herzegovina believe that media freedom in BiH is not present at all or is only partially present, and every fourth respondent is of the opinion that attacks on journalists may be justified in some cases – those are the results of the Media Freedom Survey in BiH in 2021. on the occasion of May 3, World Press Freedom Day, presented by the Friedrich Ebert Stiftung in BiH and BH Journalists Association.

As Peter Hurrelbrink, director of the Friedrich Ebert Stiftung in BiH, pointed out, this research has been conducted annually since 2009 and is of particular importance for media freedom.

– There is no free democracy without free media. Around the world, authoritarian governments are taking actions against independent media, hundreds of journalists have been arrested and convicted for reporting on the pandemic. In times of crisis, independent and free journalism is of particular importance. More than 50 journalists around the world have lost their lives in the past year because of their work, and their murders have remained unsolved and unpunished – Hurrelbrink warned.

Marko Divković, president of the BH Journalists Association, says that in BiH, when it comes to media freedoms, nothing has changed for the better for years.

– It is impossible to expect anything to improve in the working conditions of journalists in BiH, because nothing is improving in the country either. Economic factors are devastating, about half of journalists work for below-average salaries, about 40 percent of them have not resolved their employment status. Safety conditions are also getting worse – we have at least one attack on journalists a week, either verbally or physically. As long as the representatives of the highest political and judicial institutions in the country generate attacks on journalists, the situation will not change – said Divković.

Presenting the main results of the study, secretary general of the BH Journalists Association Borka Rudić said that the survey showed that in 2021 BiH citizens trust the media and religious institutions the most (76%), followed by the NGO sector (45%), government institutions (38%) and the international community (37%), while they have the least trust in political parties and politicians. Compared to the previous 2020, the largest decline in citizens’ trust is present in the non-governmental sector, the international community and government institutions in general.

When it comes to media coverage of COVID-19 pandemic, half of the respondents believe that they have had enough information about it in the last year, but also that this information could have been presented in a more understandable way to better understand the measures taken by the authorities. Respondents were divided on whether journalists adhered to ethical principles in reporting on the consequences of coronavirus, especially on deaths and the increase in the number of patients.

The majority of respondents believe that there is an evident political influence on public services in BiH, regardless of whether it is about choosing editors and directors, editing dailies and political shows or hiring journalists. Almost half of the citizens are in favor of abolishing RTV fee, while a third is in favor of direct collection of the fee.

Freelance journalist Eldin Hadžović, who recently experienced threats of physical violence by a member of the Armed Forces of BiH, described his experience.

– The reaction of the police was relatively quick, they questioned the young man who threatened me and disciplinary proceedings were initiated against him within the AF BiH. This was the third time that I reported a similar case to the Free Media Help Line and none of them has a court epilogue yet. I would like to see one day that someone is finally held responsible for such an act, especially when it comes to the behavior of public officials towards journalists – said Hadžović.

Journalist Milkica Milojević from Banja Luka pointed out the part of the research of FES and BH Journalists that refers to the diversity of topics and pluralism of opinions in the media. Although the citizens are mostly satisfied with the choice of topics, they believe that journalists should deal more with social topics, education, health topics…

-We have one small area where we all fight for the audience and one huge area that no one from the journalistic community dares to enter, in terms of different content and topics from those we are used to in the media. On the web portals you can see that everyone is more or less publishing the same content, most media play it safe and do not bother to explore topics from a different aspect. Today, in the conditions of a pandemic, it has been shown that despite the fact that new media and social networks are becoming more and more important, television is still in the first place for the citizens of BiH. As many as 57% of respondents said that they get the best information through television – said Milojević.

Speaking about the consequences of the COVID-19 pandemic on the survival of free media and professional journalism in BiH, journalist and editor Berislav Jurič from Mostar said that the media faced a financial crisis and fewer advertisers.

– This endangers especially smaller media outlets, which survive on projects for which no one guarantees that they will get them. However, another and much more dangerous thing is the exposure to the incredible political pressure that the media are facing. This research also showed an absurdity – that citizens trust the media to the greatest extent, but they also trust the politics that they believe threaten the media the most – says Jurič.

As long as we have an increasing number of attacks on journalists from year to year and the government’s ignorant attitude towards demands from the journalistic community to toughen sanctions, to change the laws on freedom of access to information, to establish an ombudsman for the media or court expert specializing in media etc., congratulations arriving from officials on the occasion of World Press Freedom Day will be left as empty phrases. However, greater solidarity among journalists is necessary as well as a boycott of those politicians who do not have a fair attitude towards the media and journalists, attack and threaten them, concluded the participants of today’s discussion.