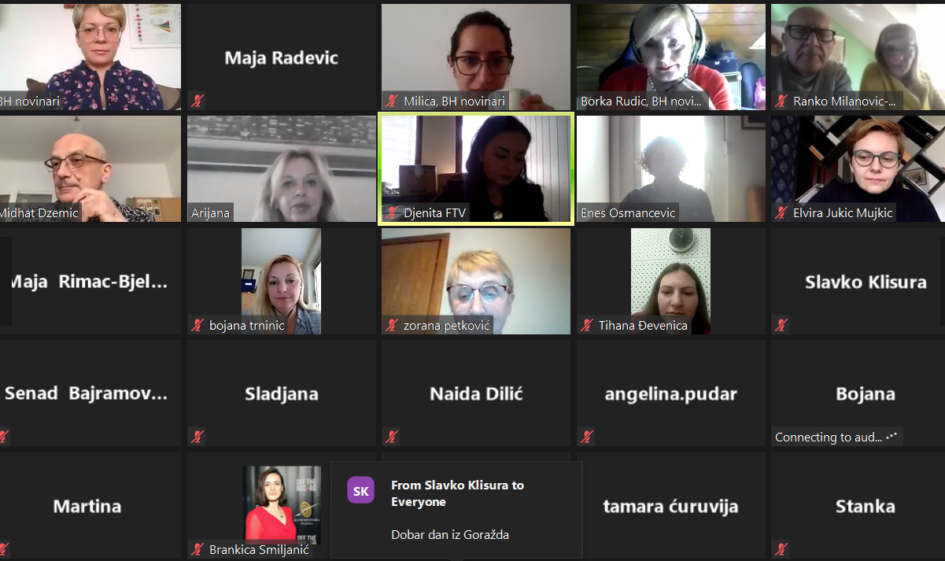 Sarajevo, April 16, 2021 – With each new IPA the rules are tightened and the scale is raised because it is assumed that the beneficiary countries are strengthening their capacities, so with the new financial instrument IPA III the requirements are much more serious. Countries wishing to use this financial support must adhere to special rules, it was pointed out at webinar on the topic of new pre-accession instrument IPA III 2021-2027, which was held today, organized by the Directorate for European Integration – DIPAK Office in partnership with BH Journalists Association, with the support of GIZ / SPI.

– IPA is not an obligation, it is a great opportunity that the European Commission offers to use in the process of joining EU, and there are special rules for it. In the Office of the State IPA Coordinator, it is always in our favor for journalists to ask as much about this, because we want this understanding to penetrate as deeply as possible into BiH society. We are obliged to clearly and precisely transmit information about IPA, without any political background – said Zara Halilović, Assistant Director of the Directorate for European Integration.

Borka Rudić, Secretary General of BH Journalists, said that there are two parallel processes in BiH when it comes to EU integration, which should actually be a joint process.

– One is run by state institutions, which are often under the critical scrutiny of journalists and media, and on the other hand we have civil society as a kind of opposition to the authorities and a monitor of what the authorities are doing. It is important for us as an Association to help our colleagues solve some dilemmas that journalists have, to determine what are the most important sources of information for journalists when it comes to the process of BiH’s accession to the European Union, what IPA actually means and what are the areas that BiH can improve – says Rudić.

Project consultants Elmida Sarić and Ranko Milanović-Blank spoke about what new IPA offers and what is especially important for the beneficiary countries, as well as journalists in that process.

– Each country has a national IPA coordinator (DIPAK) who has special powers and represents the main partner of the European Commission in the process of using IPA. The ultimate goal is to support the country in achieving political, economic and sectoral reforms – said Elmida Sarić.

Consultant Ranko Milanović-Blank stated that BiH can withdraw more funds from IPA III than it was through the IPA II project, but that depends on meeting the criteria of relevance for the conditions of EU integration. He also presented key differences between IPA II and IPA III support.

Midhat Džemić pointed out that the media can also be beneficiaries of this assistance through the area of ​​human rights, which is one of the thematic priorities of IPA III, as well as civil society organizations.

EU integrations through media content and recommendations for more serious monitoring of the entire process was the theme of doc.dr. Enes Osmančević from the Faculty of Philosophy in Tuzla. Presenting the conclusions of one of his researches, dr. Osmančević said that the presence of topics on Euro-Atlantic integration in BiH is generally weak and that such contents mostly have a daily informative, not educational character. Personnel and professional strengthening, especially of online media in BiH, strengthening of integration-oriented political forces and movements, as well as more knowledge about European and NATO integrations are necessary for better media coverage in this area, Osmančević pointed out.