Media and the right to privacy: Following the path of money is the easiest way to distinguish privacy from the public interest 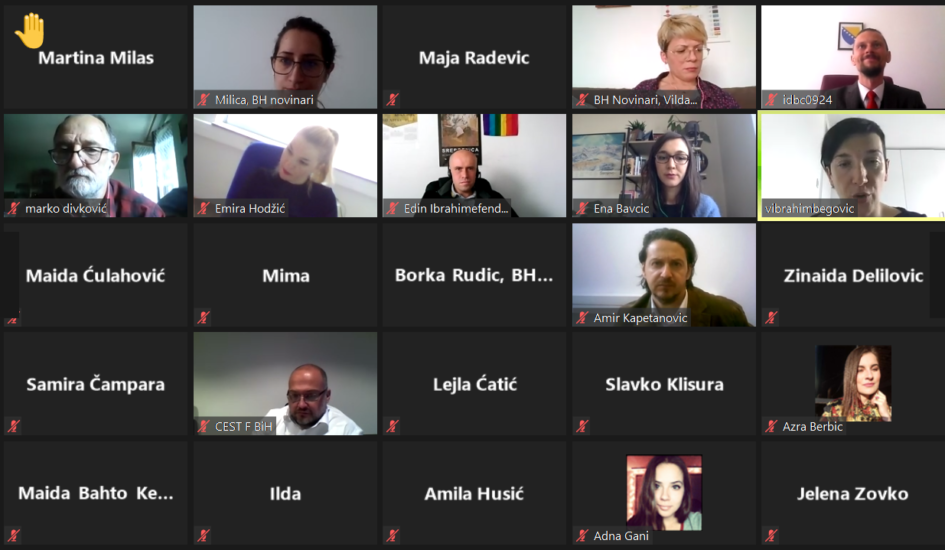 Sarajevo, March 25, 2021 – Public curiosity is not the same as legitimate interest of the public. By following the path of money it is easiest to distinguish privacy from public interest, it was pointed out during the first day of the online seminar on “Right to privacy and public interest: When the right of the public to be informed takes precedence over privacy”, organized by the BH Journalists Association in cooperation with the Council of Europe.

– Defamation, freedom of access to information, hate speech, safety of journalists, protection of whistleblowers are some of the topics we are dealing with within this project. The topic of this two-day seminar is also very important for journalists and media professionals, as well as for judicial staff, in order to establish a balance between the right to privacy and the public interest and preserve freedom of expression – said Ibrahimbegović-Tihak.

The president of BH Journalists, Marko Divković, said in his introductory speech that the problem being discussed is as old as journalism.

-We journalists have always tried so hard to defend our principle of the right to the public interest, and the performers of public functions, it seems to me, tried to prevent it with the same force. Unfortunately, public officials often knowingly abuse their positions for private purposes and that is why it is important to defend the right to the public interest – said Divković.

The curiosity of the public is not the same as legitimate interest of the public, emphasizes doc.dr. Jelena Surćulija Milojević, Council of Europe expert.

-When we talk about the right to privacy versus the interest of the public, we are actually talking about the fact that a journalist is often endangered by the state and must address the ECtHR as an individual, because the state will not protect him. However, both of these rights can be limited and often correlate. Every day, journalists decide whether to publish information from someone’s private life and that is not an easy dilemma at all, especially when it comes to public officials and information that can lead to some further investigations. It is very important to know that journalists or the media, NGOs and groups of citizens can submit an individual petition in such cases and when all instances of domestic courts are exhausted, then they can turn to the ECtHR – said Jelena Surćulija Milojević.

She added that regulators often do not realize that their decisions can also be subject to ECtHR analysis.

– Freedom of expression as a human right can be restricted only if it is prescribed by law, if there is a justified goal or if such a restriction is necessary in a democratic society. If these conditions are not met, the ECtHR will rule that there has been a violation of Article 10 of the European Convention on Human Rights. Misuse of personal information, home breach, private correspondence and all other private rights, such as sexual identity, are violations of the right to privacy. However, the question arises what to do when such private information represents a legitimate public interest? The easiest way to differentiate this is to follow the path of money – for example, if you publish photos from a politician’s vacation, it may be in the public interest in case that vacation is paid for with budget money. Otherwise, it would only be the curiosity of the public – said Surćulija Milojević and added that social networks on which we voluntarily renounce our privacy are a separate problem, because the media often share information that is published on those networks.

-Everything depends on the case, that is, on the different understanding of prosecutors and judges. For example, in BiH we had a well-known affair “Potkivanje” and a secret video with the former president of the HJPC, Milan Tegeltija, made by Nermin Alešević, to show how the judiciary in BiH works. In the end, Alešević was accused of illegal filming and Tegeltija was only a witness in that case – Đelilović reminded.

She also talked about other affairs that were revealed in Bosnia and Herzegovina by journalists in recent years thanks to secret filming, stating that in all these cases, journalists eventually turned out to be “guilty”.

-The judiciary and journalists should be on the same side, but it seems to me that the judiciary is increasingly looking at us journalists as enemies. Of course, you can’t secretly film everyone for no reason, but if there is a public interest and if a crime cannot be proven in any other way, I don’t see why journalists could not resort to secret filming – concluded Đelilović, adding that many of these cases could be avoided if the work of bh. institutions and public officials was more transparent.

Ena Bavčić, an activist and coordinator of Civil Rights Defenders, believes that the right to access public information is often denied at the expense of the right to privacy.

-It is something we see not only in practice, but also in our laws. In Sweden, for example, there is a public database where each person posts information about their property status on a voluntary basis. However, the culture of the society is such that if someone does not provide such information and performs any public function, it is automatically considered that the person is hiding something and he loses the trust of the citizens – stated Bavčić.

The director of the Center for Education of Judges and Prosecutors of the Federation of BiH, Arben Murtezić, said that journalists could be sanctioned for unauthorized filming in a strictly formal sense, but regardless of strict regulations, in some cases freedom of expression prevails over the law. He added that in cases of secret-unauthorized recording, the whole discussion often comes down to the fact that “it is not important what was recorded, but who recorded it and how.”

– Considering that we have direct application of the European Convention in BiH, it does not necessarily mean that every such behavior is punishable, especially when it comes to journalists – Murtezić emphasized.

Edin Ibrahimefendić, expert advisor of the Institution of the Human Rights Ombudsman of BiH, cited the publication of data on the names of Covid patients as an example of violation of the right to privacy.

-When it comes to secretly recording conversations or secretly taking photos, sometimes that is the only way you can prove that a crime has been committed. However, very often the information that appears and that is allegedly in the public interest has a different context, so journalists should be especially careful here. It is necessary to explain why some information is in the public interest – said Ibrahimefendić.

Samira Čampara, assistant director of the Agency for Personal Data Protection in BiH, said that when it comes to the processing of personal data that the Agency deals with, it is only one of the segments of the right to privacy.

– The European Convention specifically regulates when that right can be limited when it comes to personal data. The processing of personal data for journalistic purposes is performed in accordance with special rules and codes of conduct. None of these rights, neither privacy nor the public interest, are an absolute right. When it comes to the public interest, certain information can be published if it prevails over the protection of personal data – said Čampara.

The main goals of the two-day online seminar for media professionals, representatives of judicial and police institutions, which is implemented within the project of the Council of Europe – Freedom of Expression and Freedom of the Media in Bosnia and Herzegovina (JUFREX) are review and analysis of current cases of media reporting in BiH on alleged violation of the right to privacy, better understanding of professional and ethical standards and obligations of journalists in covering segments from the private lives of public figures and public officials, analysis of legal provisions related to unauthorized / secret monitoring and recording and publication of such content in the media, possibilities-initiatives for amendments to criminal laws and application of standards and decisions of the European Court of Human Rights in the practice of domestic courts.

Lecturers at the seminar are distinguished domestic and international media and legal experts, journalists, representatives of non-governmental organizations and regulatory bodies in BiH and representatives of the Institution of the Human Rights Ombudsman of BiH.