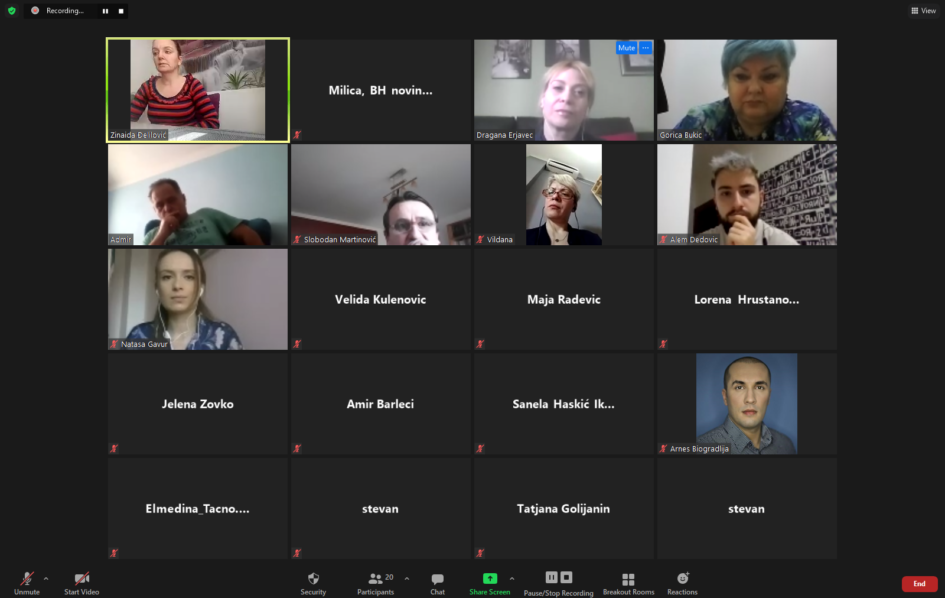 Sarajevo, February 23, 2021 – Investigative journalism is a corrective of the society in which we live, it helps citizens to get information about various corrupt practices, scandals, the connection between crime and politics, and therefore it is necessary to strengthen the capacity of journalists to produce investigative stories, especially in local media. This was highlighted during the workshop on investigative journalism for media workers from local media, as well as for freelance journalists, which was held today in the organization of the BH Journalists Association through the Zoom platform.

Educator Zinaida Đelilović from Žurnal Magazine says that daily journalism is the transmission of information from the source to the audience, while investigative journalism is digging below the surface. “Not every journalist is an investigative journalist, but he can be. It is a person who, regardless of the medium in which he works, is ready to be persistent, to have a team spirit, to have a sense of working with people, a passion for finding the truth and a bit reminiscent of a police detective, only unlike the police the journalist communicates with the public“, believes Đelilović.

When we talk about topics covered by investigative journalists, educator Dragana Erjavec from Radio Free Europe says that this seems like a serious problem to young journalists at the beginning and that at first it seems that there are no good topics for research. “Journalists who have years of experience behind them already have sharpened senses, so they find topics at every step. One of the best sources for stories is data that is available to everyone, it is the news that we read every day, and it hides first-class media sensations“, Erjavec points out, adding that a research story must always have social importance for a large number of people that it is always the work of one or more journalists who have spent a lot of time working on the topic.

“When we talk about sources, it is very important to know that the source gives us true information, and our task is to examine the reliability of the data. Trust between journalists and people who provide information can best be defined as a business agreement from which both parties have some benefit“,  says Erjavec.

The investigative process in journalism has several phases, and usually begins with a pre-investigation phase in which the archive of the editorial office is reviewed, colleagues, other media, potential interlocutors are contacted, and available documentation is reviewed.

Zinaida Đelilović points out that if at this stage it turns out that the topic is worth the effort and has a basis for research, further work is being done on collecting documentation, most often by sending requests to institutions for free access to information. “Of course, there are alternative ways of gathering information, but they must always be in accordance with the ethical standards of the profession and their credibility must be checked. After reviewing the documentation, we start interviewing the interlocutor, reject the important from the irrelevant, consult with the legal provisions related to the topic, and so the dice are slowly put together and the connections between the main actors of the story are revealed “, says Đelilović.

Being an investigative journalist in the local community is a special challenge, because journalists in these areas do not have enough of their own capacities or mechanisms with which to oppose skillful political manipulations and pressures on the media, but also on their professional work.

Admir Kadrić, a journalist from Radio Brčko, believes that media workers have an excellent tool – a medium through which they can immediately get in touch with the public, help shed light on scandals and reach public opinion, but also institutions that can further prove fraud and therefore very important that journalists do research stories in local communities in order to better inform the public. “It is not at all easy at a time like this, and in a social system like ours to work on research stories, because there is great distrust among citizens due to the appearance of a large number of portals without imprints, without ethical standards, which transmit news without any checks what is and what is not responsible and professional journalism. Another problem is that investigative stories that reveal various scandals rarely lead to court investigations, but that is why they can bring a defamation lawsuit against a journalist, so the question arises whether that journalist wants to do such stories more at all,“, Kadric said, adding that one solution could be to develop a network of investigative journalists to work on stories from local communities.

Velida Kulenović, a radio journalist from Zenica, has a similar opinion, because investigative stories that expose all the anomalies of society do not lead to investigations, there is no sense of responsibility among those who are part of corrupt practices, but various manipulations continue to deal with public affairs. “I especially emphasize local communities, where journalists are under constant pressure, instead of informing citizens, educating them and talking about all the problems in their community, they are under constant attacks and under the control of local authorities. If you have elected local politicians who advocate affirmative writing and who even criticize any critical journalism, then it is difficult to talk about investigative journalism in the local media“, Kulenović emphasizes.

Workshop participants agreed that there is a trend of connecting investigative journalists with different centers of power, all in order to discredit journalists, as well as their stories, in order to put pressure on media workers not to investigate and reveal scandals and corrupt practices that they erode bh. society. Even more problematic, according to the participants, is that when investigative journalists discover an affair, corruption where politicians are involved, there are journalists who work in media supported by politicians and then attack the colleague who published the story, which loses journalistic strength and solidarity.

Workshops on investigative journalism for journalists from local media were held within the project “Free Media for a Free Society” implemented by the BH Journalists Association in cooperation with the Association of Electronic Media in BiH with the support of the European Union. The aim of the project is to strengthen independent and free journalism in local communities, and the application of European standards in the protection of freedom of expression and access of citizens to quality and objective information.