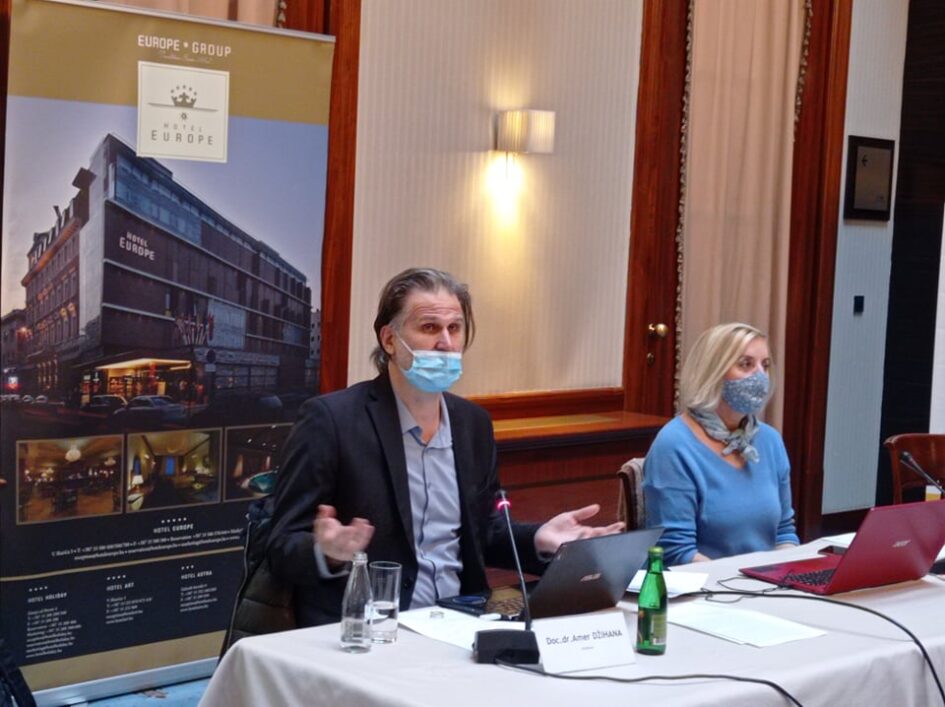 Sarajevo, February 3, 2020 – As many as 70 percent of journalists working in local media in BiH encounter self-censorship in their work, and often censorship and inappropriate demands of employers – according to a study entitled “Working conditions and rights of journalists, legal framework and management of local media in BiH”, whose results were presented today in Sarajevo, organized by BH Journalists Association. As stated by the main researcher, Dr. Amer Dzihana, 40% of respondents said they have been exposed to attacks or threats in the past three years and 75% say that politicians in power have pressured them at some point, as have opposition politicians and advertisers.

The research was conducted in the period from October to December 2020 on a sample of 440 journalists working for local print, radio, TV and online media in BiH. BH Journalists conducted this research with the aim of identifying the existing patterns of functioning of local media and determining whether they are in line with legal and international standards in the field of freedom of expression and freedom of the media.

When it comes to pressures, the respondents feel that the journalistic community and the NGO sector have the most adequate response, while they are the least satisfied with politicians and their reactions. The focus of the research was also on the working conditions of media professionals – as many as 40% of respondents stated that they work more than 40 hours a week, and 48% of journalists who participated in the research have a lower salary than the average net salary in BiH.

– This was a really extensive survey in which we received 157 answers, and we can consider that these answers represent the opinion of a good part of local media employees. Journalists are often exposed to orchestrated campaigns because of what they write and very often these attacks and threats happen online, but also in direct contact with journalists. Those involved in critical journalism are particularly vulnerable to attacks. Every kind of criticism in the media in local communities is considered almost as a kind of national betrayal – Dzihana emphasized.

Journalist and researcher Mladen Bubonjic from Banja Luka believes that the results of research reflect the real situation when it comes to the attitude of journalists about the media scene in BiH in general.

– The biggest challenges are of a financial nature because local media are not big market players and many online portals are financed from projects. We at Gerila portal had a case of attempted murder of our colleague Vladimir Kovacevic, which was a drastic example of an attack. We did not have any explicit political pressures, but I think that the majority of the media in BiH encounters this problem – said Bubonjic.

Due to the fact that they are financed from the budget, local public media are in some way “blackmailed”, says journalist Aida Stilic from RTV USK.

– Labor rights of journalists and (self) censorship are mutually conditioned. I think that self-censorship is a much bigger problem today than censorship and whether we will manage to get out of that vicious circle, depends only on us. We put ourselves in the position of being obedient. We need to have a good and strong journalists’ union – said Stilic.

The editor of RTV Vogosca, Elvir Halilovic, believes that self-censorship in the public local media is a consequence of the fact that journalists in many cases take on the role of mediators in order to solve citizens’ problems.

– Local journalists are already accustomed to the pressures and the fact that everyone can belittle them, from the allocation of budget funds, and so on. I am an advocate of knowing exactly the amounts that should be used to finance local media and journalists and to determine how many media one local community should have – says Halilovic.

Freelance journalist from Mostar Kristina Gadze, who conducted research on the labor rights of journalists, states that freedom in the local media is questionable and young journalists who are just at the beginning of their careers are especially discouraged.

The main recommendations of this study are to strengthen existing mechanisms and initiatives aimed at reducing attacks on journalists, launch strategic activities to reduce the impact of politics on local media, strengthen trade union and professional association of journalists and to start targeted and serious discussions on the future of local media. The research is part of the project “Free Media, Free Society”, implemented by BH Journalists in cooperation with the Association of Electronic Media in BiH (AEM BiH), with the financial support of the European Union.