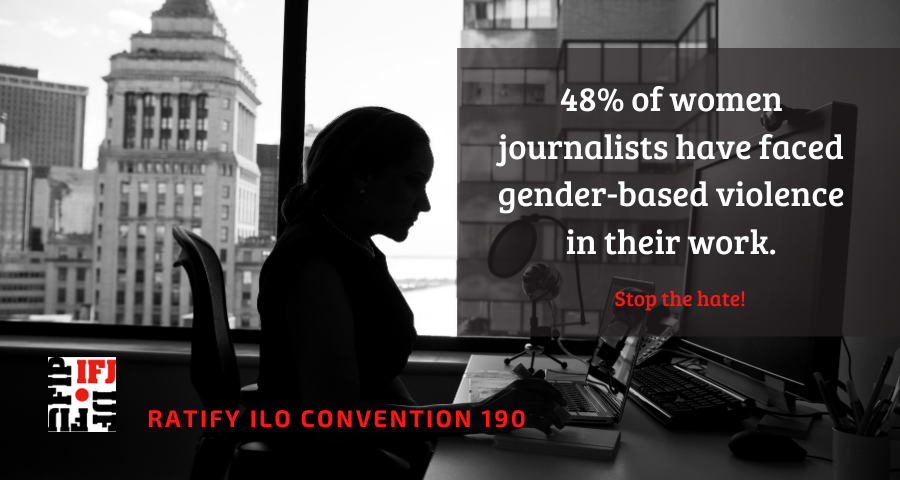 Sarajevo/Brussels, 25.11.2020. – On the International Day for the Elimination of Violence Against Women and girls on 25 November, the International Federation of Journalists (IFJ) and its Gender Council call on world governments to act responsibly to eradicate violence against women by ratifying the ILO Convention 190 on harassment and violence in the world of work and urge social media platforms to introduce binding steps to act against online violence. At the same time, the IFJ called on social networks and platforms to introduce more effective measures against online violence, especially against female journalists.

According to an IFJ survey published in 2017, 48% of women journalists claim they have faced gender-based violence in their work and 44% have faced online abuse.

“The fight against gender-based violence at work must be backed by solid policies and procedures that punish women’s attackers and send a clear message that there is a zero tolerance on gender-based violence in newsrooms”, says IFJ Gender Council Chair Maria Angeles Samperio. “A massive ratification of ILO convention 190 on harassment and violence in the world of work by world governments is key to achieve this”.

The convention outlaws violence against women at work, including online abuse, and makes it a health and safety issue. Once ratified by a country it obliges media employers to ensure a safe workplace and provide a solid mechanism for women journalists to lodge complaints and be protected when subject to abuse.

The IFJ regrets that only Uruguay, Fiji and Argentina have ratified the convention so far. The federation urges its affiliates to join forces with the trade union movement to force governments to take concrete steps towards ratification.

The IFJ also warns against the pervasive effect of online abuse against women journalists’ freedom of speech and well-being as well as media pluralism. The federation calls on social media platforms to take immediate steps to ban sexists, racists and abusive comments on their platforms.

“We are concerned that the level of response of social media to women’s complaints on online abuse is inadequate and that their so-called policies to eradicate targeted abuse are not effective nor truly implemented”, says IFJ general Secretary Anthony Bellanger.

The federation’s Gender Council has put together a list of 8 tips that can be followed by social media platforms to make a change. The Council recommends in particular that social media platforms develop security and privacy tools such as blocking, muting and content filtering. Social media staff must also be trained on how to best identify misogynic and abusive comments and notice and take down measures should be implemented immediately.

“Women must be able to come forward and denounce online abuse without fear of retaliation, and social media must allow and support this. It is time to send a clear message that online harassment is not part of the job”, said President of the IFJ Gender Equality Council.