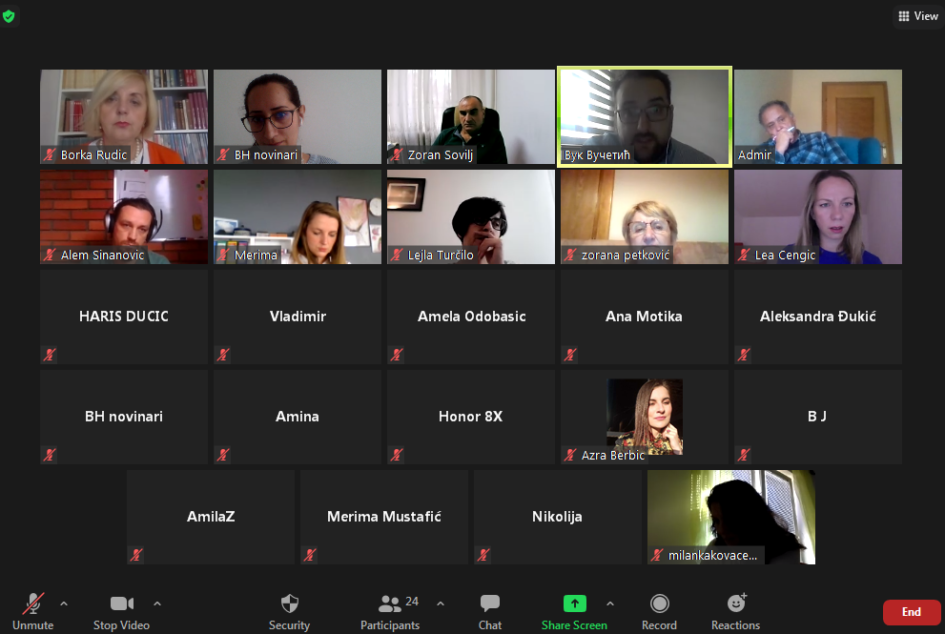 Sarajevo, 10.11. 2020. – Local media must primarily be in the function of public interest, and editorial policies should be separated from the political interests of local officials and ensure pluralism of opinion through media content. This was pointed out during today’s presentation of media monitoring results entitled “Local media – quality of media content and information for citizens, pluralism of opinion and diversity of information sources”.

According to prof.dr. Lejla Turčilo, who led the research, the aim of the research was not to make lists of (in)quality media content, but to notice key trends in the local media and give recommendations for their more professional work.

– The essence was to consider how much the local media really work in accordance with the public interest and especially how much the principles of impartiality and pluralism of opinion are present. The sample was made of 34 local BH media, and 617 media contents of printed, electronic and online media in public and private ownership were monitored – said Turčilo.

Monitoring has shown that almost half of the media content in local media is reserved for local politics or “light” topics and entertainment. Education and environmental issues are the least represented, although in general topics that are important to citizens are still widely reported. It is a worrying fact that in more than a third of media content there are no interlocutors at all – this mostly refers to the publishing of press releases and statements, as well as personal interpretations of journalists on certain topics. Also, only one source appears in much of the content. In about 42% of the contents, the interlocutors are treated equally, but in almost a third of the contents, some local officials are preferred over other interlocutors.

– What is most devastating is that in 95 percent of the content there were no opposing opinions, not only because of the small number of interlocutors, but also because of the fact that those interlocutors were selected to fit into the narrative that a particular medium prefers. In other words, interlocutors are often chosen to support an already stated position – said professor Turčilo.

The research also showed that web portals are mostly subject to the influence of local officials and their interests, while televisions have the most field work and a larger number of interlocutors in their reports and shows. Some of the recommendations of the research team for local media are to put the public interest in the forefront, make more content about education, culture, environmental protection…, and to ensure a larger number of interlocutors who have different opinions on a particular topic, to ensure pluralism of opinion.

Professor Vuk Vučetić believes that the importance of researches such as this one is significant, especially in terms of additional education of journalists working in local media.

– A local journalist is actually a “street hero”, he is the one who notices specific problems of citizens and tries to solve them. Local media are especially important when it comes to the professional development of young journalists, who start their careers there. The results of this monitoring are not surprising, especially in the sense that the views of local officials are transmitted in non-selective way or by copy-paste method. That is definitely not the essence of the journalistic profession, but the fact that it has become an established practice speaks that newsrooms do not have enough resources and journalists to work on the field, as well as the bad conditions in which these journalists generally work – says Vučetić.

The editor-in-chief of the Bljesak.info portal, Berislav Jurič, emphasized that local journalists have a problem getting access to the statements of their interlocutors, especially politicians who do not agree with the content that certain media publish.

– One side will never give you a statement, so you will then turn out to be a “player” of the other side and that is how they make enemies of you with their silence. Also, I think that the role of local media in BiH is completely misunderstood, because they should actually be a source of information for all “big” media. It is also difficult to define what the public interest is and what the audience actually wants to read and watch. People are not interested in many topics today, even when we are talking about very serious, research topics – says Jurič.

TVSA Executive Director Haris Dučić believes that the results of the research faithfully show the situation in the local media in BiH.

– That self-censor chip that all journalists who work in local media that are financed from the budget have certainly exists, but editors and journalists should insist on their principles and pluralism of opinion. It is especially important to communicate directly with the citizens and give them the opportunity to communicate with us, to ask questions that we will then pass on to our interlocutors. Only the competencies and professionalism of people who know how to work can fundamentally change things in the local media and enable them to get rid of political and other influences – said Dučić.

Amela Odobašić (Communications Regulatory Agency – CRA) said that local radio and TV stations are a priority in the work of CRA.

– Local media are extremely important, regardless of the globalization that imposes media content. Their problems are numerous and most often they report to us with the problem of lack of human resources due to which they cannot realize certain contents – stated Odobašić.

Participants in today’s online discussion particularly emphasized the problem of self-censorship in the local media, ie the “line of least resistance” that journalists often follow and which leads to a one-sided approach in media content. Also, the political pressure on the media in BiH is increasing, and this is especially evident in the periods of election campaigns and in the part of web portals that are even owned by certain political centers of power. Budget-funded local media are also a problem – in return, they are expected to pursue certain political interests.

The research is part of the project “Free Media, Free Society”, implemented by the BH Journalists Association in cooperation with the Association of Electronic Media in BiH (AEM BiH), with the financial support of the European Union.

The Secretary General of BH Journalists, Borka Rudić, said that this was one of three researches that will be conducted by BH Journalists. In addition to this monitoring, research is planned regarding the legal framework under which local media operate and their internal procedures, and a third study will be dedicated to NGOs in support of local media.

– We have a whole program that deals with media issues where we try to help both the development of free media and the application of positive EU practices in our region. The situation in the media is not great and we are all aware of that, and now it is further aggravated by the pandemic. This is a continuation of a project that has been going on for a long time and we are pleased to have a partner in civil society who is able to implement such an important activity – concluded Vladimir Pandurević, program manager of the EU in BiH.