“I Vote for a Woman” Campaign 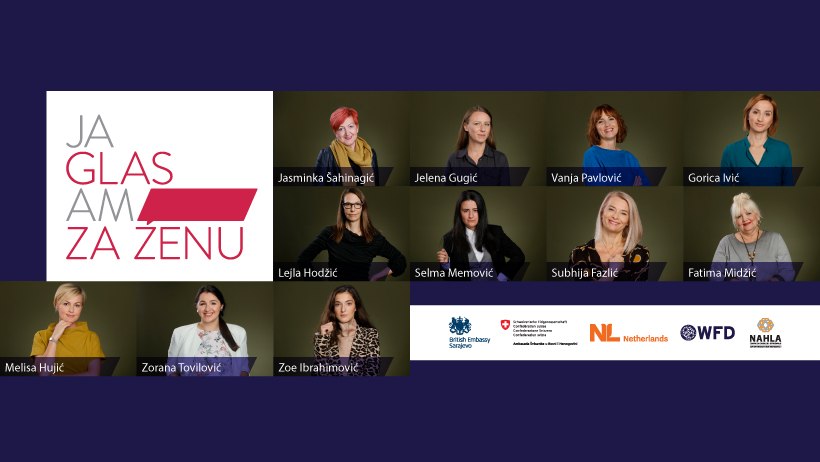 With the desire to contribute to all women candidates in the elections, observed individually through their qualities and competencies and to give women the opportunity to show their abilities without prejudice and distrust, the Center for Education and Research “Nahla” became one of the project partners and “I vote for a woman” campaign.

“The goal of the campaign is to draw attention to the need for their achievements and work to play a crucial role in the evaluation of candidates, and not gender, and that every woman has a name and surname. A woman is, above all, an individual with personal capacities and aspirations and that is why we have chosen that through this campaign a woman speaks, by story, name and attitude, and not by statistics. As a civil society organization with two decades of work behind us, we encounter fascinating life stories, strengths and achievements of women on a daily basis and we wanted others to become aware of them as well. The campaign does not talk about women as a mass that has only one sign, but we are talking about women as individuals whose achievements should be valued as such. We do not want women to be seen as a group, to be judged on the basis of the mistakes of one of them, nor to be attributed to everyone the attributes through which a particular group views a woman. We do not want prejudices, we want objective assessments, “Nahle said in a statement.

“At the same time, we want to emphasize that prosperity comes where everyone has an equal chance to succeed and make mistakes. Civil society organizations are among those who are most directly aware that our society, unfortunately, denies equal opportunities to numerous groups, on various grounds. With this campaign, we are talking about the “small” half of our society. Equal opportunities are not in quotas, they are not in statistics, they are not in platitudes, no matter how good it sounds that no one should be left out. There are equal opportunities when it is equally (irrelevant) to us for the candidate what kind of parents, spouses, workers, where they were educated and what they apply, which promises they made and which they fulfilled. ”- it is further stated.

It is extremely important that we know on what basis we give trust to each person. For us, that is the essence of this campaign, because that is how we act and value, person by person, in our entire work, based on quality and results.

“We see the campaign” I vote for a woman “only as the beginning of talks that will be continued by local representatives, organizations, but above all citizens who will promote such examples of hardworking and capable women for the prosperity of their community.” – Nahla concludes in his statement.

The Network of Female Journalists in BiH joins the “I Vote for a Woman” campaign, conducted by the Westminster Foundation for Democracy and the “Nahla” Center for Education and Research, with the support of the Governments of Great Britain, Switzerland and the Netherlands.