Media in BiH and dealing with the past: Patriotic journalism must not be an excuse for spreading hate speech 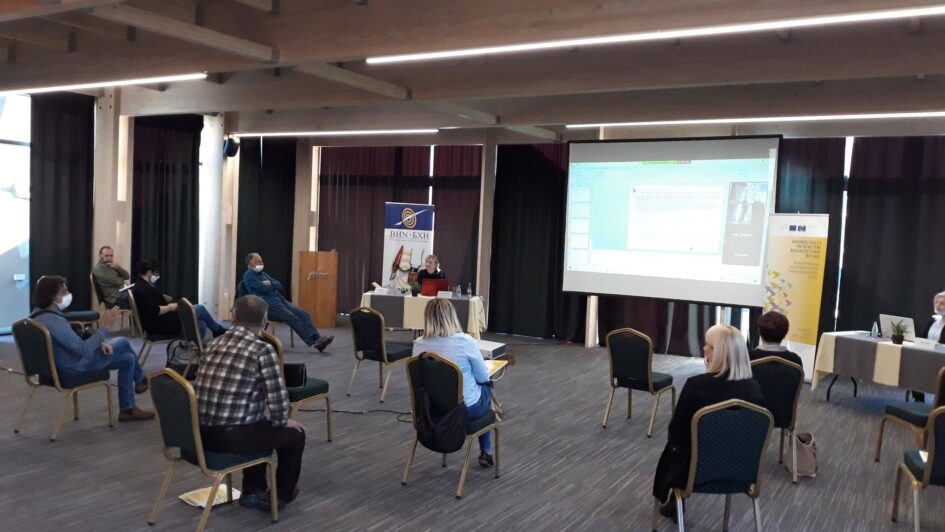 Sarajevo, October 20, 2020 – The judiciary in Bosnia and Herzegovina is burdened with numerous problems that media professionals often do not see, and also the representatives of judicial institutions do not listen to the problems that journalists encounter in their work. Therefore, it is necessary to have a dialogue between the judiciary and the media community, because ultimately we all have the same goal: we want to contribute to freedom of expression and build a better, more democratic society, said Vanja Ibrahimbegovic Tihak, project manager of the Council of Europe Office in BiH, during the second day of the workshop dedicated to media coverage of war heritage, war crimes trials and reconciliation processes in BiH.

Speaking about the examples of media reporting that they encounter on a daily basis in their work, the Head of the Communications Regulatory Agency (CRA) for Program Content and Complaints Azra Maslo emphasized that when it comes to the war past, there is no unified consensus on terminology in BiH nor clearly defined laws, which makes it much more difficult for CRA members to decide on the way in which the electronic media report on these topics.

– There is no law on genocide denial in BiH. We do not have a consensus at the state level on whether aggression took place in BiH or not, so that puts CRA in a very difficult position when we talk about such topics. However, the media have an obligation not to allow only one opinion to prevail in their programs – Azra Maslo pointed out, and added that the media should rely on court rulings in their reporting.

The Secretary General of the BH Journalists Associaton Borka Rudic stated that the CRA should act proactively, and not only on the basis of complaints, ie complaints from citizens.

– The constant reminder of the CRA’s competencies that it can impose sanctions against media that violate the code represents a reduction in the possibility of biased reporting, especially when it comes to war events – Rudic believes.

Enes Osmancevic, a member of the Complaints Commission of the Press and Online Media Council in BiH, spoke about self-regulation as a mechanism to preserve journalistic ethical standards.

– It is the social context that determines the work and activities of the media. Of course, the media should set certain standards and values ​​and in some way lead society in the search for better and more progressive. We have a problem of transitional justice, our society, institutions and leaders are simply too passive about it. There is also a lack of political will to deal with the past and an ethno-clerical concept of power, that is, the fact that the people who started the war and even the war criminals are still in power today. These hate policies are still dominant and they produce hate speech – says Osmancevic.

He added that in our country is still present “the so-called patriotic journalism, which is not really journalism, but a kind of propaganda and incitement. “

– Reporting on war crimes should be in the function of individualization of guilt, instead of collectivization of responsibility for committed crimes. You still have that war rhetoric present in our media, on the basis of which someone who is not from this area could conclude that the war is still going on here. The media can certainly contribute a lot in dealing with the past, but the problem of our media is that they are insufficiently independent in relation to politics – concluded Osmancevic.

Speaking about how the media can contribute to building peace and reconciliation in post-conflict societies, Council of Europe expert Ara Ghazaryan presented some examples from the case law of the European Court of Human Rights related to hate speech.

– If the readers’ comments on a certain text contain hate speech, the media editors have the obligation to remove it. In certain cases, the ECtHR cites indicators of hate speech, that is, certain offensive words that refer to e.g. to some ethnic group and can provoke violence – Ghazaryan explained.

– The main goal is not to use expressions or ideas in the media that are in conflict with established historical facts and court rulings, such as the Holocaust or the genocide in Srebrenica. If a journalist does the opposite, then we can assume that he has some hidden intentions that are contrary to the code of ethics and does not rely on credible sources – Ghazaryan points out.

Lejla Turcilo, a professor at the Faculty of Political Sciences in Sarajevo, says a distinction needs to be made between a culture of remembrance and dealing with the past.

– Often when we talk about the topic of the past, we ignore this difference, and this is directly reflected in the interpretation of media content. When it comes to the culture of remembrance in the media, one of the key narratives is this paradigm of the demand for memory versus the demand for oblivion. We are faced with numerous examples of true versus false interpretations of the past, and here we must all be responsible for being guided by established facts, regardless of the dominant political and other agendas – said professor Turcilo.

She spoke about the research “Media and War Legacy”, one of the goals of which was to determine how journalists see their role in dealing with the past.

– We have reached interlocutors from BiH and Serbia who have very different views in this context. Colleagues told us that they notice that the process of catharsis did not take place in the media, nor did journalists face the past and their role in that process. The attitudes of the respondents show that they are also aware of the fierce polarization on the principle of “we” and “they”, that is, victims versus criminals – says Lejla Turcilo.

Dejan Sajinovic, a journalist with Nezavisne novine, asked how much power the media really have to change public opinion.

– If all the media in Republika Srpska somehow miraculously agreed to report on the war past in the way that the media from Sarajevo report, do you think that the citizens of RS would accept that as facts and change their attitudes? I don’t believe that would happen – says Sajinovic.

He added that social networks and the opportunity for everyone to say what they want in public space have led to even greater “chaos” when it comes to reaching a possible consensus on events from the past.

Vildana Kurtic, journalist and editor of Nova BH television, believes that the problem is the constant need to commercialize and tabloidize everything, even the victims of the war.

– If you don’t have a tear in someone’s eye in a TV report, no one will praise that report. This does not even necessarily come from an editorial request, but has been imposed as a form of how media content about war crimes should look like – says Kurtic.

She added that it is already known in advance how each newsroom in BiH will transmit certain information when it comes to war events or war crimes trials.

– For some, for example, there is an anti-Serbian court that acquits war criminals, for others the accused is a hero, not a criminal, and this is prepared in advance. I don’t think that several media reports can change public opinion, but if you manage to change the opinion of at least some individuals with that report and make them wonder if some things from the past played out differently than they believe, that’s enough – says Kurtic.

The workshop held in Trebevic, organized by the BH Journalists Association and within the Council of Europe project “Freedom of Expression and Freedom of the Media in BiH” (JUFREX) was held with the aim of achieving a better understanding of professional and ethical standards and obligations of journalists in reporting on war heritage, improving the exchange of information between the media and judicial institutions in accordance with the public’s right to information and the protection of the dignity and rights of victims, their families and witnesses.