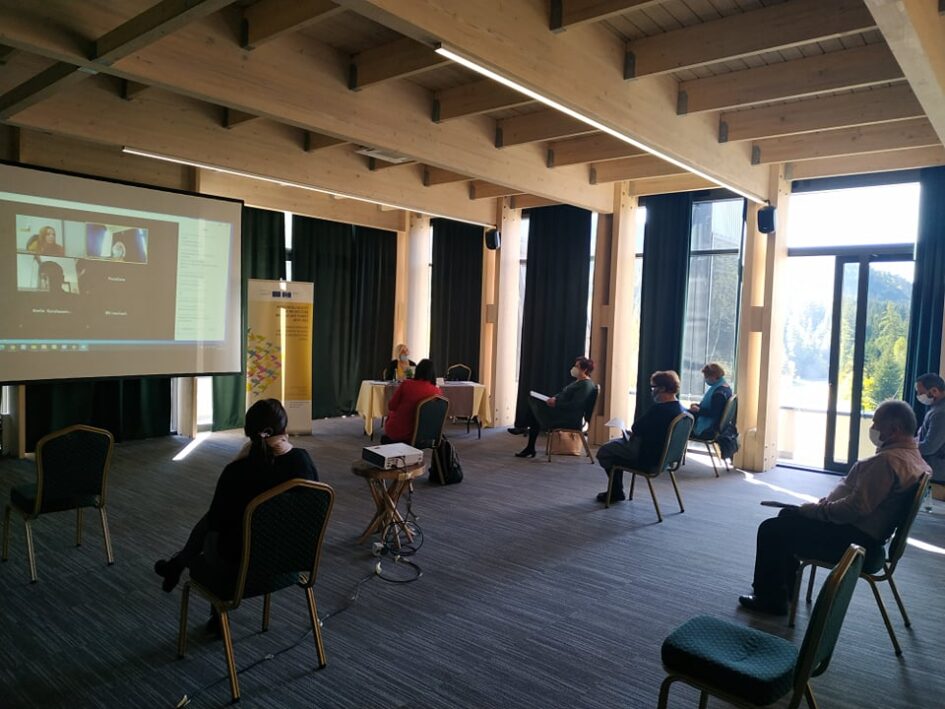 Sarajevo, October 19, 2020 – Relationship of the media from Bosnia and Herzegovina in dealing with the past is largely determined by politics and a number of media in the post-war period have become an instrument for spreading hate speech and relativizing war crimes – it was said during the workshop “Media coverage of war heritage, war crimes trials and reconciliation processes in Bosnia and Herzegovina” which started today in Trebevic, organized by the BH Journalists Association.

The two-day interprofessional workshop is intended for media professionals, representatives of judicial institutions and the police, and is implemented within the project of the Council of Europe – Freedom of Expression and Freedom of the Media in Bosnia and Herzegovina (JUFREX). Project Manager of the Council of Europe Office in BiH Vanja Ibrahimbegovic Tihak pointed out that the main goal of the project is to ensure consistent application of the European Convention on Human Rights and application of the case law of the European Court of Human Rights in domestic courts when it comes to freedom of expression:

“We are cooperating with CRA ​​as well as with our media partners, BH Journalists and the Press Council. The dialogue we are developing between the representatives of the judiciary and the media community in BiH is the basic product of this cooperation and we are especially proud of this segment of our work, all with the aim of strengthening media freedom and freedom of expression in BiH. “

The President of the BH Journalists Association, Marko Divkovic, said in his introductory address that when it comes to the media and judicial community, there is a lot of misunderstanding between the two professions.

– Journalists often experience inconveniences and disputes from judicial institutions and that is why we want to discuss it and try to find solutions on how to overcome this, because in the end we both have the same goal: to publish the truth – said Divkovic.

The media in BiH move in a triangle between memories, oblivion and denial – that is, exactly the matrix that politics has created, in the opinion of political analyst Tanja Topic.

– That memory can be selective and the critical attitude towards the past, above all towards one’s own dark side of the role in the war, is missing. The question is how much we would have done in that area at all if we did not have a stronghold and support from international organizations and the international community – said Topic.

Speaking about the media constructions of memory, Tanja Topic said that it cannot be reduced only to traditional media, but also to film, theater, as well as to the attitudes that are published on social networks.

– In the Republika Srpska, there was a long silence about the genocide in Srebrenica, and then a film about Scorpions was published and the citizens were confronted with that image in public for the first time. Then there was a political turn and there was a relativization of genocide, with the media taking on the role of relativizing and even justifying crimes as “preventive action.” The largest mass grave after the Second World War, Tomasica, is also an example of a conspiracy of silence in the media. Only a few media in the RS reported about it – said Topic.

She added that many media outlets in our society have become a means of spreading hate speech.

If a journalist glorifies genocide or war crimes, it is a criminal act, says Ara Ghazaryan, a Council of Europe expert.

– When you call legally qualified genocide a “massacre”, of course it relativizes what the court-proven facts are. What happened in the 90s was a challenge for the media and journalists, but now there is a new dimension to it all. The question is whether it is enough to adhere only to ethical norms in journalism, or whether the application of the law should be strengthened when it comes to hate speech. In my opinion, it is necessary to re-evaluate the law on the ban of hate speech and strengthen the criminal law, as well as to introduce certain ethical forms – Ghazaryan stressed.

Vlado Adamovic, a lawyer and former judge of the Court of BiH, and Denis Dzidic, editor-in-chief of BIRN BiH, spoke about how the media report on criminal proceedings and war crimes trials and whether they do so in the interests of the public and the families of the victims. According to Adamovic, journalists should not work on behalf of the victim, nor on behalf of the accused. Just like no court.

– A journalist works in the interest of the public and the right of the public is to be truthfully informed. Just as the court adheres to principles and must be independent and impartial. There is no compassionate judgment, nor judgment with empathy, because then it is not judgment. In that sense, journalists are very similar to judges – Adamovic emphasized.

He added that war crimes trials are among the most complex cases, especially with the introduction of the so-called command responsibility, which is completely contrary to our law.

– As the HJPC made shortcomings in the selection of judges who try war crimes, there was also a confusion among journalists because it is no longer known who the journalist really is. Without order, there is no serious work, so journalists’ associations must have a unified attitude towards their profession and monitoring war crimes trials. It must be known who is the journalist who can enter the courtroom and report from these trials – said Adamovic.

BIRN BiH editor Denis Dzidic says war crimes prosecution is one of the four pillars of transitional justice and is essentially the only mechanism that BiH has so far more or less systematically implemented.

– One day, all these media reports from the trials could serve as a potential basis for the establishment of a commission for establishing the facts and for reconciliation, which will be crucial considering that all war crimes can never be prosecuted – said Dzidic.

According to him, BIRN journalists covering these trials must have certain knowledge and experience, and the principle is that everything must be based on facts.

– In general, it is very difficult financially for most media to provide a journalist who will follow a court process from the beginning to the end, considering that trials in certain cases last for several years. Another problem is that for many journalists and media, these trials are generally not interesting and it is very difficult to make them receptive to readers. Unfortunately, journalism students at colleges do not learn at all about how to report from courtrooms, not even basic things about legal proceedings and that is also a big problem – says Dzidic.

He also spoke about the closure of judicial institutions to the media, which has been intensifying in recent years. One of the problems is the decision of the Prosecution not to publish the content of the indictments anymore, and without the available indictments, the journalist cannot report professionally from the trial, says Dzidic. Access to information is often denied to journalists, especially when it comes to the Prosecutor’s Office of BiH, which most often responds to all media inquiries with the sentence: “No comment.”

The editor of the Bljesak.info portal, Berislav Juric, says that although journalists should be impartial, especially when covering war crimes trials, this is not the case here.

– Unfortunately, it turns out that you are not a journalist if you do not side with someone. The big problem in all spheres of society, including journalism, is that you have incompetent persons. You have young journalists who have never entered a courtroom, let alone know how to report from a trial. On the other hand, the media are burdened with a lot of things, including the role in reconciliation, facing the past and the like, and it is not the media that can reconcile society – said Juric.

Among the main goals of the workshop organized by BH Journalists are to achieve a better understanding of professional and ethical standards and obligations of journalists in reporting on war heritage, war crimes trials, media contribution to the process of dealing with the past, reconciliation and building a tolerant society, as well as better cooperation between media and judicial institutions that must be based on BiH criminal law, the public’s right to information, and the protection of the dignity and rights of victims, their families and witnesses.