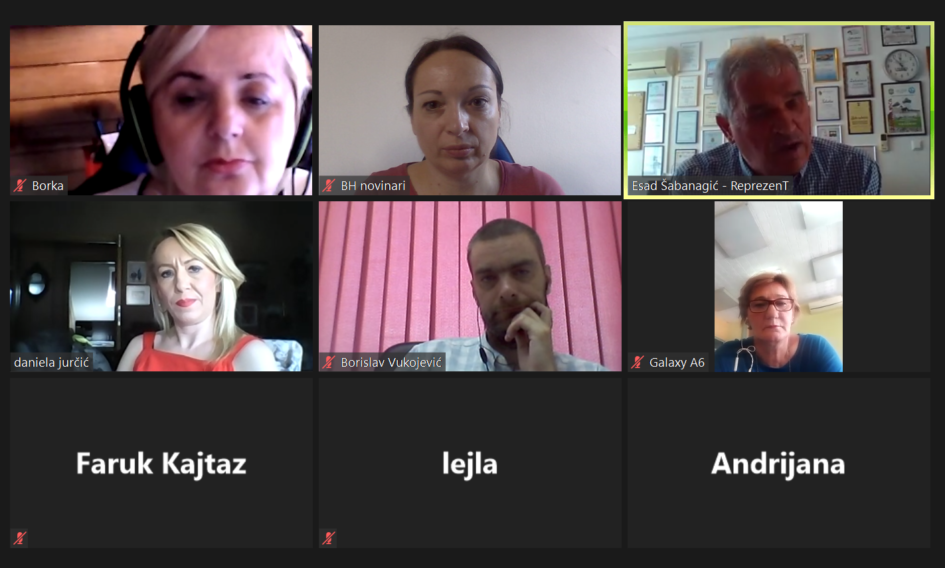 Sarajevo, July 16, 2020 – Solidarity within the media community and joint public pressure on political institutions and decision makers are key to solving many problems that journalists and media in BiH have been facing for years – from inadequate legal protection and media legislation, to the safety of journalists, freedom of expression and very poor economic status and conditions of their work – this was pointed out during the online discussion on the research “Indicators on the level of media freedom and journalists’ safety in BiH 2019”, organized by BH Journalists Association.

Political influences and economic pressures on BiH media are becoming more visible, and journalists have less and less freedom in creating the content they work on while facing self-censorship and censorship almost daily. In 2019, a total of 56 cases of attacks, threats and pressures on journalists in Bosnia and Herzegovina were registered. Of that number, nine physical attacks on journalists and media employees were recorded, as well as eight death threats. The Free Media Help Line (FMHL) has data on 289 active defamation lawsuits against journalists and the media in the last five years. The average salary of journalists in BiH is 880 BAM. Overtime is not paid, and in many media houses, taxes for health and pension insurance are paid irregularly. The political and regional divisions in BiH are deeply reflected in the issue of journalistic solidarity and the possibility of forming a single trade union organization, which would bring together journalists from all over the country.

These are just some of the results of a research by BH Journalists, conducted within the regional network of journalists’ associations in the Western Balkans (www.safejournalists.net). The results of the research were discussed by prof. dr. Lejla Turčilo, Head of the Department of Communicology/Journalism at FPS Sarajevo, doc. dr. Daniela Jurčić from the Faculty of Philosophy, University of Mostar, Velida Kulenović, journalist of Federal Radio and member of the BHJA Steering Committee, Esad Šabanagić, editor of the independent Krajina newspaper Reprezent, Faruk Kajtaz, editor of the independent online magazine Starmo.ba from Mostar and member of the BHJA Steering Committee, Borislav Vukojević, senior assistant at the FPS at the University of Banja Luka, Andrijana Pisarević, journalist of Srpskacafe, Borka Rudić, general secretary of BHJA and Maja Radević, researcher/project coordinator of BHJA.

As the participants in today’s online discussion pointed out, this kind of research should leave the circle of the media and academic community and must be discussed at the level of political decision-makers.

– It is discouraging that we are already getting used to such circumstances in which journalists and media work in BiH today – from the legal norms we have and which are generally good, but not applied in practice, to the issue of safety of journalists and economic conditions in the media, which are getting worse. It seems to me that there is no political will to solve these problems, and it is especially worrying that there is less and less will within the media community as well. However, public pressure is key to the visibility of all our problems. I’m afraid that citizens know very little about how and under what conditions journalists work and that is what needs to be changed because bad journalism endangers citizens and their right to be well informed, and not for someone to manipulate them – said prof. dr. Lejla Turčilo.

According to Daniela Jurčić, the situation in BiH media is largely a reflection of the political situation in the country,

– How can we expect our media to be professional and high-quality in addition to such corrupt politicians? I think that the education of journalists, especially young people, is very important here, as well as who can be a journalist at all. Interest in the study of journalism still exists although it is declining every year, and this is surprising given such a poor media image in BiH – says Jurčić.

Participants in the discussion particularly highlighted the extremely bad situation in local media operating in smaller communities, whose problems often remain in the shadows and are considered less important compared to public services and media from larger cities.

– The problems of local media and journalists who work for them mostly remain out of focus, although we have numerous reports and analyzes in which the status of local media has been highlighted as one of the main problems in the media community for years – says Faruk Kajtaz.

– There were no major changes in Zenica-Doboj Canton last year. Pressure on the media continued and journalists were even fired for disobedience, especially in the local media. It is enough to see what is happening on RTV Zenica. I am afraid it will only get worse because on the one hand, local elections and the start of the political campaign are approaching, and on the other hand you have the fact that during the pandemic journalists were much more exposed to the risks of their profession and in that period it became visible in what poor conditions we work – said Velida Kulenović.

Esad Šabanagić emphasized that one of the problems is large number of “wild” portals and media – it is not known who owns them, or who works in those media.

– That is why we need a law on the transparency of media ownership and to create a public register of media outlets. In general, journalists in BiH need more solidarity and truth, and less self-censorship and censorship – says Šabanagić.

Speaking about the legal protection of journalists and media, Borislav Vukojevic emphasized that it is devastating not only that journalists do not have adequate protection in cases of attacks on them, but that it sometimes takes on absurd dimensions so even though there is evidence, investigations in judicial institutions are suspended, very slow and inefficient. The same opinion is shared by professor Lejla Turčilo, who states that the connection between politics and the judiciary can be easily noticed on the examples of processing attacks on journalists.

– When it comes to lawsuits filed by journalists/media, these lawsuits are usually rejected or kept in drawers for months, and when the journalists are sued by those who are close to political powerful people, it all goes much faster. Such a relationship clearly shows the intention of judicial institutions and their connection with politics – concludes Lejla Turčilo.

The report “Indicators on the level of media freedom and journalists’ safety in BiH 2019” will be published in the next month.