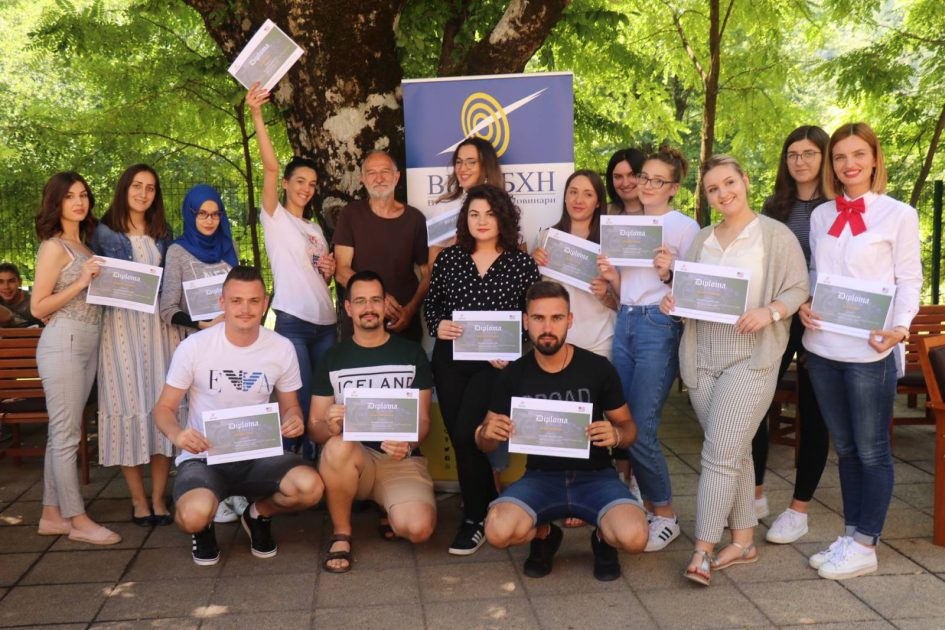 During the three-day training, 14 students and young journalists from all over Bosnia and Herzegovina had the opportunity to learn and discuss the forms of hate speech through numerous panels and lectures by media professionals, experts from academia and representatives of non-governmental organizations. in public, how young journalists and bloggers in particular can fight hate speech and intolerance, how the media and social networks can be a public platform for the deconstruction of hate speech, and whether Bosnia and Herzegovina has adequate legal, institutional and social mechanisms to combat against that phenomenon.

One of the lecturers at the Journalism Academy 2020 was Daniela Jurcic from the Faculty of Philosophy, University of Mostar, who talked to the participants about media and information literacy as (self) education on the deconstruction of hate speech in public space.

“Unfortunately, hate speech in BiH has become a common means of communication by which we encourage, spread or justify hatred, especially towards minority groups, and in this context, violence in society becomes justified. We spread intolerance, discrimination and violate other human rights. Media literacy in general would certainly contribute to the reduction of hate speech, but it would also help to turn passive consumers of media content into active citizens of BiH, which would further reduce apathy among citizens and reduce the spread of false information and fake news, which unfortunately many take for granted, without critical reflection and re-examination “, believes Jurčić, adding that polemics about hate speech in academic circles, together with students, is more than desirable, because students will find it easier to understand this phenomenon through a serious theoretical framework.

Vlado Marić, a journalist from Nova BH, discussed with the participants the role of public and private media in the fight against hate speech. He is of the opinion that media professionals use hate speech less and less today and that he has moved to internet portals and social networks, where anyone can say anything.

“The role of journalists is still no less, because it is necessary to put an end to the expression of hatred in public space. The media, in addition to refraining from such statements, they can also prevent them, because the responsibility of media workers lies in the fact of what to let the public and what not. Hate speech certainly has no place here. “Through their reporting, journalists should not” transmit “someone’s hate speech because they indirectly participate in it, and they should certainly clearly and loudly condemn it,” Marić emphasizes. He adds that “if we take into account that the political climate in the country is very conducive to the spread of hate speech and that legislation and control are not adequately regulated in all segments, the care and conscience of individuals, journalists, professionals, human beings should be crucial in stopping “Evil tongues”.

On the last day of the Academy, columnist Adis Nadarević talked to the participants about online media and social networks in the fight against hate speech, with a special focus on migrants and refugees.

“In order for a society to be able to resist media manipulation, it is necessary to have a highly developed ability to correctly interpret the information they receive through mass communication channels, and the ability to recognize sensationalist, misleading and false news. Although professional ethical standards of journalism oblige comprehensive, uniform and humane media coverage in Bosnia and Herzegovina, reporting on migrants and refugees very often leads to inflammatory rhetoric, it is stereotypical and unreliable, “said Nadarevic.

One of the participants in the Academy was Emina Smajic, a student at the Faculty of Political Sciences at the University of Sarajevo, who believes that the Journalism Academy is an education that brings new experiences and broadens horizons, but also the adoption of professional skills that are key in combating hate speech.

“It is very important to have a dialogue on a social problem that is hate speech, because only conversation can break down those established barriers and prejudices,” Smajic said.

Sumeja Mehmedović from the Faculty of Philosophy, University of Tuzla, is of the opinion that young people need more space to express their views and opinions.

“The Journalism Academy is a great opportunity to hear the voice of all young journalists who are ambitious to change the world. Also, in addition to education, we got the opportunity to meet new people and make new friends, which is an additional motive for applying to this academy, “says Mehmedovic.

Kristina Vučić, a graduate journalist from Mostar, says that the Academy has brought her a lot of new acquaintances, positive experiences, life stories, both positive and negative, which can be instructive for her.

“I think that the topic itself is very important both in public space and in the social life of individuals, and journalists greatly influence the creation of public awareness, especially in the environment in which we live. “Journalists in a country like ours have to put more effort into doing their job than journalists in other countries,” Vucic points out.

Vuk Vasović from the Faculty of Philosophy at the University of East Sarajevo believes that the deconstruction of hate speech in public space is one of the ways to fight against this social problem and also one of the mechanisms for creating a tolerant and open society that accepts the other and different.

“The Academy of Journalism is an education that gives us the opportunity to, first of all, meet people who come from other ethnic communities, and then to create a dialogue for the future without the presence of hate speech, prejudice and stereotypes,” Vasovic said.

The summer educational camp, organized by BH Journalists Association since 2013, is held with the support of the Embassy of the United States of America in BiH