A year of black chronicle, filtrated information and auto censure 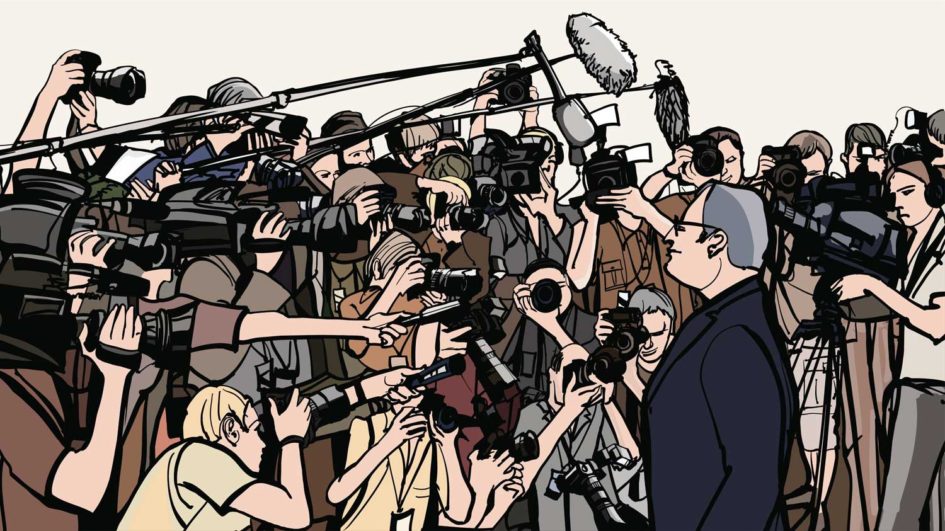 Sarajevo, 12.02.2020. – When we talk about media situation in BiH during 2019, it is obvious that political pressures, auto censures, followed by numerous threatening and threats, but also physical assaults and attacks on journalists, in large scale marked the year of 2019. Therefore, the situation in 2019 had not changed in comparison with previous years in this sense. The role of media has always been to release news, release audio – visual contents with the purpose of informing, educating and entertaining general public audience. In order to have all of these met and fulfilled by professional journalists’ standards and principles, we should start with the ethics of informing in the first place.

The ethic of informing

The ethics of informing that I shall be covering in this text is, above anything else, tied and related to journalists’ activity in general. It is bound and to some extent tied with the role of media and their relations and tied with the conduct towards the general public audience. This specific theme has again, many critical zones that (apart from journalists) many editors and media entrepreneurs have to encounter since this process, at the end, does make significant impact and influence on the quality of released information.

Journalists working for media houses have in 2019, as well as during previous years, been encountering and facing the following set of problems:

These critical zones are in different ways related to all parties involved in communication plans in our society. They are even related to general public audience. The question is whether the general public audience can, at least to some extent, be held responsible for the information they receive, because, in order to improve the situation on media scene in BiH, general public audience must take certain part of responsibility as well. We have had the opportunity, particularly in local web sites, to witness that it was the public that would often create and tailor web site contents. Unfortunately, the black chronicles posted on these local webs site sections are always the most popular choice for viewing with the highest number of viewers, including video clips that should not be posted anywhere in the first place, due to the fact that they often contain scenes that some viewers may find distressing.

General public audience, on the other hand, seem to be feeding themselves on such contents and believe that they are deprived of full and accurate information, unless they are provided with clips of smashed cars, including the footage of full accident and dead bodies in cracked and smashed cars.

Media must take full responsibility for the texts and articles they post, including video clips, photos and released information. They have the liberty not to release and post certain footages, video clips and photos, if some viewers may find these distressed; however, it is personal choice for every single individual and general public audience to choose whether they want to consume provided material. Taking this into consideration, media have in 2019, flooded and loaded local media scene with distressed and disturbing video clips and footages (video recordings showing murders, killings, car accidents, child abuses Etc).

And then ask ourselves what happened to ethics here.

When we talk about ethics, the truth should be the most important factor here; nevertheless, responsibility should equally be taken as crucial factor as well. This is where we get to important segments that media have faced and encountered in 2019 (including previous years too) and this was their responsibility towards the general public audience. This particular responsibility should be more important than any other responsibility, especially in terms of the conduct towards employers and public figures. The question is: Has it achieved this goal?

Just as I have already written, one of the most fundamental or basic task for media, is informing and in order to have general public audience informed, it would be necessary to enable and ensure free access to information, including information sources, as well as the right to free survey, research and investigation of everything that may have impact and influence on public lives. Having said this, we come to either a question or problem of media dependence or independence, particularly in 2019.

Namely, certain individuals performing public functions are often prepared to release information to carefully aimed and selected media house and this or these media houses would in return and at the end justify these actions thus providing these individuals with support. Therefore, the year of 2019 cannot be marked as the year where we could talk about equal conduct and relationship of ruling governing officials towards certain media houses.

And when journalists post something without permission coming from “the top level”, which party they should be accountable to and do they even have a chance to report to anyone from “the top level”?  Would these journalists be the only party held responsible in this sense, or would this be considered as collective responsibility, having media house that they work for equally held responsible?

Personal conduct and relationship of journalists towards the sources they use, in order to get certain information, vastly depend on the relationship that media houses (that the journalists work for) would have with the surrounding environment and would also depend on the fact that media houses must keep good relations and well balanced ties with key public figures of social system. These relationships and ties are established on reciprocity based favors: sources tend and attempt to release certain information in public whenever they considered it suitable from their own point of view and based on their personal interests on one hand, and media houses, on the other hand, tend to collect various information and material in order to release the news in public. However, in reality, this reciprocity cannot be considered as the safest way of functioning for either party involved in this process.

The information that the sources want to release in public are not necessarily the information that may be considered interesting to general public audience and the information that journalists require on the other hand, are those that the sources often refuse to provide or at least they often do not give up on them easily. Namely, while some information is being ignored, other tends to be more valued and is being advanced to a higher level of big scale events and venues. We could accordingly conclude that there is a certain relationship of power balance, developed between the journalists and their sources and the sources usually come out as winners in this specific relationship, since they have the capability to control and master the situation and decide on the content of information which is to be released, including the moment in which they decide to release certain information.

We therefore talk about complicated and complex mechanisms with social systems coming into the game, including political systems which, as a result, produce maximum limits, as far as journalists’ independent work is concerned, particularly from the survey, research and investigation point of view. This is why general public often conclude that journalists’ objectivity is often of illusionary nature and objectivity is, by its own nature, not denied; instead it is brought down and narrowed to information availability and source authenticity repsepctively.

Every media control in our country that is not based on internal shape and form of regulations, presumes the intervention of political figures, which can clearly be seen through countless number of media houses where media managers simply become and act as “extended hands” of particular political parties. This way does result in the violation of fundamental principles of professional journalism, which as a consequence present ordinary journalists with awkward and humiliating situations, especially when they are expected to release previously filtrated and controlled information by the above mentioned and listed “top level” sources.

Confronting this “chain” would mean being ready and prepared for sanctions, or eventually being ready to even physical assaults or attacks, just as there were many cases like this in 2019.

Consequently, it is no surprise that many journalists practice auto censure in order to find “peace and safe existence”.

This kind of situation could last for as long as the general public, along with local journalists, do not begin to impose pressure on political parties and governing institutions, in order to advance legal framework that would eventually, result in the improvement of working conditions in media field.

(This article was published in E-journalist bulletin no.72/73)