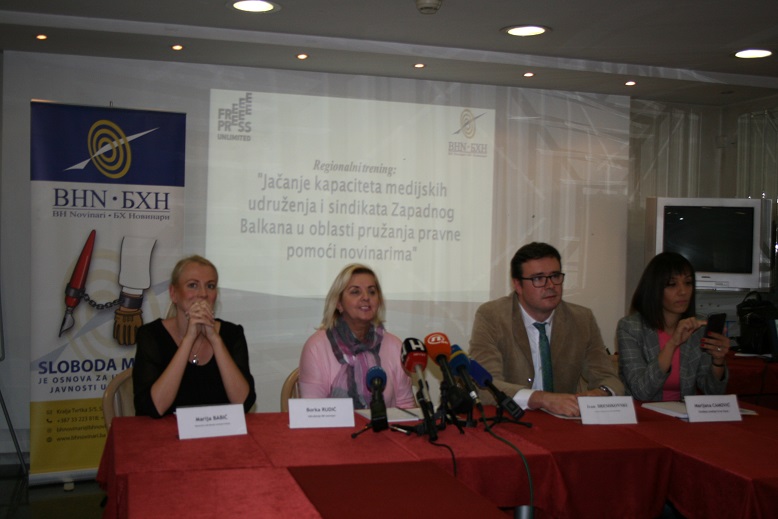 SARAJEVO, 02.11.2019. – The judicial authorities of countries in the region must process attacks on journalists, whether physical or verbal, as quickly as possible. As pointed out on a press conference held in Sarajevo on November 2, International Day to End Impunity for Crimes against Journalists, journalists cannot be attacked while doing their job.

The press conference was organized by the BH Journalists Association in cooperation with partners from the region.

The need for more efficient prosecution of attacks on journalists, prevention of impunity and more effective implementation of the Council of Europe standards in the application of Article 10 of the European Convention on Human Rights was addressed at a press conference by Marija Vukasovic of the Independent Association of Journalists of Serbia, Marijana Camovic of the Union of Media of Montenegro, Ivan Breshovski from the Association of Journalists of Macedonia and Borka Rudic from the BH Journalists.

Since the beginning of 2019, 48 cases of attacks on journalists and violations of the right to freedom of expression have been registered in BiH, said Borka Rudic, secretary general of the BH Journalists Association, noting that impunity in many cases is the result of the attacker’s direct connection with centers of political power.

“We pay special attention to ten physical attacks against journalists, whose perpetrators are linked to political and economic centers of power. Such attacks are justified by politicians. In addition, there is pressure from the judiciary in BiH, where those who are supposed to protect journalists and their right to freedom of expression are creating new cases and turning into those who commit violence. It is unacceptable not to punish attackers, no matter where they come from or whether they have political power or protection. If you do not punish 70 percent of attacks on journalists, then this is one very destructive message for the citizens and the public”, Rudic said, adding that the media themselves should boycott those individuals and institutions that are attackers against journalists.

Regional Legal Assistance to journalists in BiH, North Macedonia, Serbia and Montenegro started functioning in May this year with a focus on providing free legal assistance to journalists and media from the Western Balkans region and strengthening the network of lawyers who will deal with the defense of journalists before the courts and creating conditions for more effective application of the principles of media law in the protection of freedom of expression and freedom of the media. Between May and the end of September, 80 cases were processed through the Regional Legal Assistance.

“The murder of Dusko Jovanovic, editor-in-chief of ‘Dan’ daily in 2004 is the most drastic example of an attack on journalists in Montenegro, but also an example of how the state is unable to cope with such cases. We still do not know who shot Jovanovic, who ordered the murder and why. A few days ago we received an explanation that the competent prosecutor was too tired on the night of the murder to take statements from the key witnesses and accomplices”, said Marijana Camovic of the Montenegrin Media Union.

She also mentioned the attempted murder of journalist Olivera Lakic last year, and that it is unknown to this day who shot her and on whose order.

“The Montenegrin government formed a commission last year to investigate cases of attacks on journalists and the media. The commission made recommendations, but so far the competent institutions have not followed any of these recommendations,” Camovic concluded.

The impunity of attacking journalists must become a thing of the past, said Ivan Breshovski, a lawyer at the Macedonian Association of Journalists.

“We want to change the criminal code so that the attack on journalists is treated as an attack on persons who perform professional journalistic duty, and now we are working on it. The plan is also to create a protocol for better cooperation between police and journalists. In 2019, there were two physical and one verbal attack on journalists in Macedonia and in the last few years a total of 55 cases of violations of journalists’ rights and security”, Breshovski said.

Both journalists and media professionals in Serbia are daily exposed to attacks, threats and pressures.

“NUNS has recorded more attacks and threats this year than in the previous three years. The target are most often journalists who write critically and do their job in accordance with professional standards. There are frequent pressures on journalists when senior officials and politicians label journalists by calling them enemies of the state, spies and similar. Politicians, instead of condemning such attacks, only encourage them”, emphasized Marija Vukasovic of the Independent Association of Journalists of Serbia (NUNS).

She mentioned the case of burning the house of journalist Milan Jovanovic last year, where the Mayor of Grocka municipality is suspected of being one of those involved in the arson.

“Although some progress has been made in cooperation with the judiciary, judicial epilogues of attacks on journalists in Serbia are still very rare, and penalties are mild,” Vukasovic added.

Three years ago, a regional Safejournalists network was set up to protect the rights of journalists from the region. The web site of this network contains one of the largest databases on attacks against journalists – as many as 570 registered cases from BiH, Serbia, Montenegro, Croatia, North Macedonia and Kosovo.

Representatives of journalists organizations from the region have pointed out that such a network is a very good tool for preventing all forms of impunity of attacks against journalists, and especially for preventing avoiding trials of attackers, including those who hold the highest functions in the country.
BHN, Sarajevo, 02/11/2019