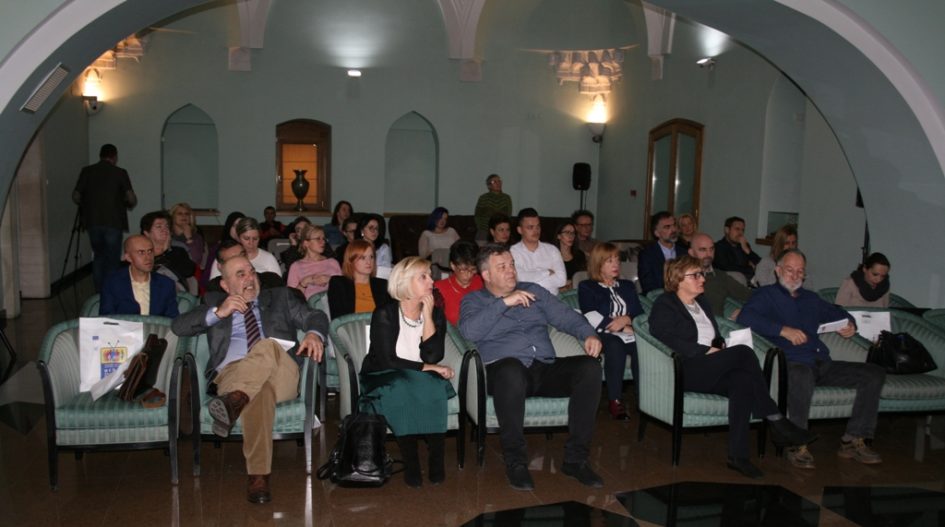 Sarajevo, 18.12.2019. – Online platform mapiraj.ba for systematic monitoring and public presentation of cases of human rights violations through media content, as well as nine sectoral surveys on the human rights status of marginalized groups, on the basis of which the White Paper on Human Rights in the media in Bosnia and Herzegovina will be published, were presented today at the final conference “Media for Human Rights”.

In the past decade, we have seen a worsening of media freedoms, violations of individual rights of journalists and other vulnerable groups in BiH. We are also witnessing political pressures and other illicit influences on the media and media professionals. In this context, journalists, as a vulnerable group whose professional, labor and social rights are violated on a daily basis without legal sanctions, cannot be active promoters of human rights.

Journalists become civil rights violators by discriminating against others and different and by upholding stereotypes imposed, violating the code of journalistic ethics and professional standards by using hate speech, incitement and other inappropriate speech, and completely exclude or not making visible enough problems, needs, and the interests of minority, marginalized and vulnerable social groups within their reports or other media content.

All these issues and problems were highlighted at today’s conference, which was held as part of a cca. € 313,000 project funded by the European Union with the aim of enhancing cooperation between EU institutions, authorities and NGOs and the media in the field of protection and promotion of human rights. The need for networking of the media, citizens, civil society organizations and government institutions has been put to the fore to create and use online tools to promote, present and protect the human rights of vulnerable groups through media content.

“This project is unique in every way. When we started it three years ago, we wondered if it was possible that for all these years, no one had made a connection between the media and human rights in this way. That is why I think this project has given us a strong foundation so that all activities that the media outlets and non-government organizations do together are for the well-being of all BiH citizens”, said Vladimir Pandurevic, project manager with the EU Delegation in BiH.

The media are most often concerned with human rights either incidentally or manifestationally, said Marko Divkovic, president of the BH Journalists Association.

“The result is that we are far from a position from which we could say we are satisfied. It is a fact that a large number of journalists are in the category of those whose rights are being violated more and more, so the overall position and treatment of human rights often depends on the placement and commitment of the media editors”, emphasized Divkovic.

Researcher Srdjan Puhalo said that within the last three years, three series of studies have been conducted on marginalized groups, which include journalists, women victims of violence and returnees as a group that is of very little concern today. Puhalo briefly presented the results of each research, and when it came to journalists, he emphasized that their rights are often not respected, and the question was raised whether they could adequately address human rights topics.

“Every day or often, over 30 percent of journalists suffer some form of pressure from politicians in power. If we know that this is happening, then we should not be surprised by today’s perception of journalism and journalists as socio-political workers”, Puhalo said.

Research shows that every other woman in BiH has suffered some form of violence since the age of 15, Puhalo said.

“As many as 84.1% of women said they had been slapped. That’s a huge percentage that we really all have to think about. The aim is to encourage women to report violence rather than being bullied, silent and suffering, as is now the case for the most part. Most of them say they did not report violence because they were ashamed, they were afraid for their lives and for the lives of their loved ones, they did not know who to turn to… It is a message to the system, but also to all of us”, Puhalo said.

Speaking about returnees, Puhalo pointed out that this is a group that no one sees today and no one cares about and that they are left to themselves. It is a group that is exposed to various forms of discrimination such as inability to get a job or obtain construction permits, education, investing …
Secretary General of the BH Journalists Association Borka Rudic said that the media outlets are human rights defenders by default, and now we are in a situation where they are among those who violate the rights of others.

“Mr. Priebe’s assessment of the work of the Ombudsman in BiH has gone unnoticed in our public, stating that the Ombudsman Institution has not fulfilled its legal obligations and has only stayed on giving opinions, which is insufficient. Very often, we have been aware that one should not just give an opinion, because institutions are not obliged to carry out that opinion. We cannot develop an institution in one field without protecting that human rights in another field”, said Rudic and added that the Mapiraj.ba platform was created precisely so that “we no longer hold that information about human rights violations in the public institutions, somewhere in the boxes, but to make that information available to all citizens”.

“Experience has shown us so far that there are not many of those who wish to provide such information and this is one challenge we must face. The most important thing is to start cooperating, networking and sharing information”, said Rudic.

The panelists Lejla Huremovic, Jasmina Mujezinovic , Almir Panjeta and Adis Nadarevic emphasized that the state and its institutions should not tolerate human rights violations, regardless of the group in question. Freelancer Almir Panjeta, who has been dealing with children’s rights and their protection in BiH for years, said that human rights should be considered as a whole.

“You cannot claim the rights of one group while challenging the rights of another group. Children are rarely reported by the media, unless if there is an incident or problem, and when they are, journalists often neglect the Convention on the Rights of the Child, the CRA rules and the Code of Ethics”,Panjeta said.

Lejla Huremovic, an activist for the LGBTQ rights, stated that the Government of the Federation of Bosnia and Herzegovina made a decision last year to set up a group to work on drafting the Law on Same-Sex Partnership but because of the political situation, nothing is done so far.
“It really speaks to how seriously LGBT rights are taken. This year we had the Pride Walk in Sarajevo and we thought it would help politicians start talking a little bit more on this topic, but unfortunately that was not the case”, said Huremovic.

She added that journalists and media outlets in BiH are becoming more protective over the rights of LGBT persons and that they mostly report about their problems professionally and in a positive manner.
The Media for Human Rights project was launched in early 2017. It is funded by the European Union in Bosnia and Herzegovina as part of the European Initiative for the Development of Democracy and Human Rights in BiH, and is implemented by a Consortium of BH Journalists, the Pro Educa Education Center and the European Federation of Journalists.

In almost three years of project implementation, the Consortium organized 20 events involving more than 500 journalists, editors, representatives of government institutions, academia, international organizations and the civil sector and conducted 9 sectoral surveys on the status of human rights in the media, with the participation of over 1000 representatives of vulnerable social groups. A public campaign was also conducted, in which 15 research articles on the human rights of marginalized groups were published, 75 advertising content was produced, and over 300 media reports were published on the project activities.
BHN, Sarajevo, 18/12/2019