Strengthen the cooperation between media and judiciary 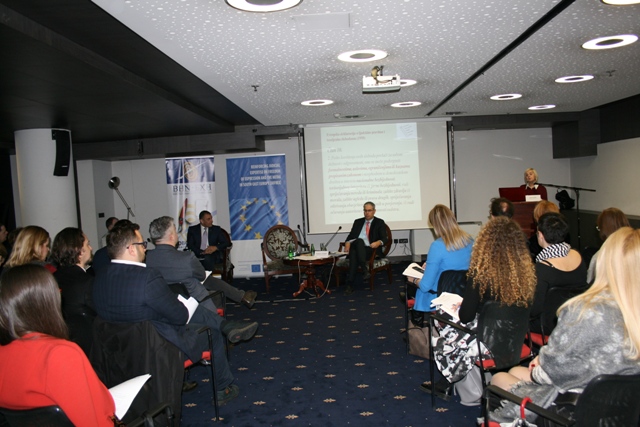 SARAJEVO, 29.02.2018.- The relationship between media and judiciary needs to be improved, and the only way is that both communities respect the standards and work in the public domain, which is their basic function, as stated at the JUFREX Final Conference “Media and Judiciary in BiH: Improving Freedom of Expression and Protection of Public Interest in Media Content ” that was held in Sarajevo and organized by the BH Journalists Association.

Project activities were directed on joint education and inter professional dialog among journalists, media professionalists and media organizations, on one side, and the representatives of the judicial community – judges, prosecutors and lawyers, on the other side, aimed on improving the implementation of the Article 10 of the ECHR.

Opening a conference of Head of the Council of Europe Office in Sarajevo Drahoslav Štefanek stressed the importance of cooperation between two professional communities – the judiciary and the media, to protect the freedom of expression. He particularly emphasized the security issue of journalists while performing professional tasks. Security of journalists is a global problem and it is not a feature for BiH alone, on which all government institutions need to work more” said Ambassador Štefanek, reminding of the Council of Europe Platform for the Promote the Protection of Journalism and Safety of Journalists through which they report and resolve journalist attacks through the actions of local authorities authorities and international institutions.

President of BHJA, Marko Divković also referred to the increasing number of attacks on journalists who remain uninhibited, who in the court are mostly qualified as “smaller offences”, which encourages the attackers to re-attack.

Political Advisor to EUSR / EUSR in BiH Shad Matar said that freedom of speech has always been an important issue not only in BiH, but throughout the world, but freedom of the media can not exist without an independent judiciary. „The level of freedom of expression is proof of how demanding this country is, so the most worrying statistics is that the attacks have not been eradicated.“, considers  Matar adding that conferences and projects like this are needed in order to create a democratic society.

The ombudsman at the BiH Institution of Ombudsman for Human Rights, Jasminka Dzhmhur is of the opinion that we currently have two very strong segments of BiH society that are in conflict, namely the media and the judiciary. “The media have a responsibility to transfer the information in the form they become it in, and the judiciary to provide information in their original form, because they are important not only for the media but for the citizens,” emphasizes Dzumhur.

Media expert and lawyer Mehmed Halilovic believes that dialogue between the judiciary and the media is indispensable, but that it will not advance the reputation of any other, but only independent and responsible work. “Unfortunately in both professions we have a lot that does not contribute to a positive public reputation and only when we begin our work conscientiously we can say that we have made some progress”, emphasizes Halilovic, adding that BiH has done significant work in the field of media legislation, but it is as always a problem of implementation and the lack of new laws such as the Law on Transparency of Media Ownership and the Advertising Act.

The participants had the chance to discuss on four seperate panels on the implementation of the Defamation laws, hate speecha nd freedom of expression, criminal protection of journalists and media professionalism, and reporting on judicial institutions .

Journalists, lawyers, prosecutors, judges and representatives of civil society organizations concluded in the final plenary session that both communities, media and judiciary, have to respect the standards of both professions much more and that the forms of communication and the continuation of joint education and inter-professional dialogue are necessary. They also recommended: naming a media Ombudsman, strengthening the Fund for representing journalists before Courts, the amendment on the Criminal Code in Entities and at the State level for the introduction of the criminal offense of  “Attacks on Journalists and Endangering Security” while performing professional tasks and improving the application of the practice of European Court for Human Right in the processing of acts of defamation, as well as the stronger fight of media community against hate speech in public space.

This conference was held under the joint project of the European Union and the Council of Europe: “Reinforcing Judicial Expertise on Freedom of Expression and Media in South East Europe”.
BHJA, Sarajevo, 29/01/2019