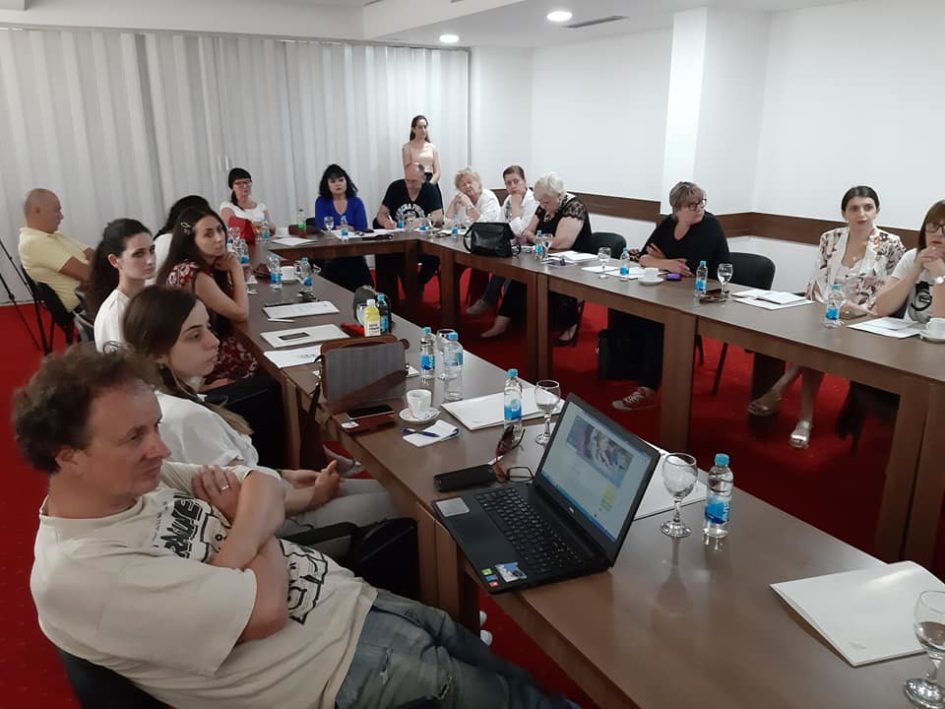 BANJA LUKA, 29.06.2019. – Mobing and discrimination are the most common forms of human rights violations of female journalists in media companies, which is why it is necessary to educate female journalists about their rights and encourage them to use legal and institutional protection more – emphasized the participants of a workshop on “The Position and Protection of Female Journalists in BH Media“, held in Banja Luka, organized by BH Journalists Association (BHJA).

The intention of the BH Journalists is that through strengthening the network of women in journalism, mutual solidarity and the advancement of knowledge on legal and institutional mechanisms for the protection of women’s human rights, improve the position of female journalists and motivate them to fight for equal access to managerial and editorial positions, as well as to be equal with their male colleagues in the distribution of influence and power in the media.

In Bosnian media, only 24 percent of editorial and director positions belong to women.

– In most cases it is considered that women can not be in a higher position due to gender bias because they are considered “weaker” than male colleagues and as if they can not perform their tasks in the same way. We in the editorial board of „Nezavisne“ are demanting this daily. I think that women can perform these duties with the same quality and even better because they are more sensitive to the majority of needs of female and male journalists, including all the weight of performing journalistic tasks – said Sandra Gojkovic-Arbutina, the editor-in-chief of „Nezavisne novine“.

She added that during her long-standing journalistic and editorial career, she learned how important it is for a male or female editor to go through all the positions in journalism before they meet the editorial office.

– This way I can understand my female and male colleagues better, their needs and expectations from editors – said Gojkovic-Arbutina.

In protecting female journalists the support of their media house is especially important, as well as support of colleagues and the solidarity of all journalists in cases of threats, attacks or other forms of violence, says Gordana Katana, correspondent of “Oslobođenje” from Banja Luka.

– It is a daunting fact that colleagues will not stand behind those who get threats or if their other rights are violated – said Katana.

With the support and solidarity of colleagues, in her opinion, it is important to understand the other needs of colleagues who are exposed to long-lasting pressures or verbal violence: “Psychological support is important and the struggle to preserve not only physical, but also mental health.”

The lack of confidence in institutions and organizations whose job is to deal with cases of breaches of journalists’ rights, insufficient support from the media and the colleagues are just some of the reasons why female journalists almost never report violations of their rights. Fatima Becirovic from the Gender Center of the Federation of Bosnia and Herzegovina has pointed out that it is very important for woman journalist to recognize and report any type of attack, abuse, even any form of allusion about her appearance, behavior and the way she performs journalistic tasks.

– The attack on female journalists has a gender dimension because it includes their family, family life, the way they look and dress… – Becirovic said, emphasizing once again that judicial proceedings concerning gender violence last long and they’re often not effective, but they are still the only way to protect a victim of violence and gain legal satisfaction for everything she has suffered.

Female journalists in the Republic of Srpska and all over BiH are more exposed to verbal attacks, sexism and other forms of sex discrimination and intimidation than their male colleagues. Even in communication with women journalists a different language is used. For Milkica Milojevic, journalist of EuroBlic, a problem is in particularly long term part-time work or illegal work without any contract, application, payment of health insurance and other taxes and contributions.

– Colleagues often get contracts for a certain time due to the alleged “fear” of the employer that a female journalist, as soon as she gets a permanent employment contract, is going to want to extend her family, go to sick leave or something similar! Such approach is inadmissible and inspections have to include in checking the working status of female journalists and employers behavior much more – Milojevic said, adding that, unfortunately, she also had experience with women managers and editors who were not more sensitive or more fair to female journalists.

More than 20 participants of the workshop – journalists, representatives of NGOs, activists and human rights defenders from Banja Luka, Bihać, Sarajevo and Bosanska Krupa, publicly supported Vanja Stokic, the editor of the portal E-trafika, as she is exposed daily to the unjustified treatment from the police while performing her journalistic tasks in the yard of the church Christ the Savior in Banja Luka, where citizens gather with the request to clarify the case of tragically deceased young man David Dragicevic. The workshop participants will request by an official letter from the Republic of Srpska Ministry of Interior to stop the repression of journalist Vanja Stokic.

The workshop in Banja Luka was held under the project “Strengthening the Network of Female Journalists in BiH”, implemented by BH Journalists through the USAID Independent Media Empowerment Program (IMEP) and with the support of Free Press Unlimited from Holland.
BHN, Banja Luka, 29/06/2019