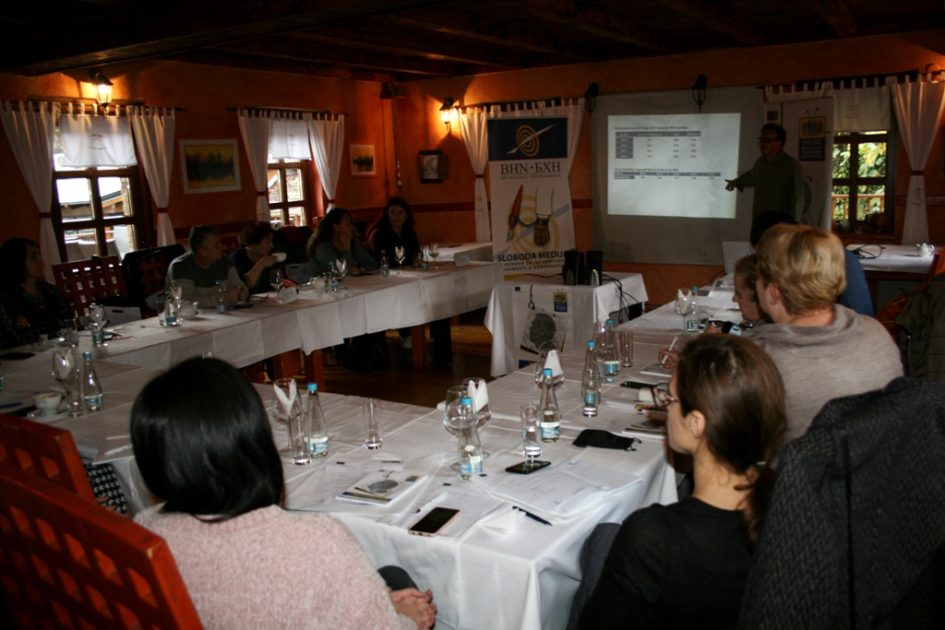 Mostar, November 30, 2019 – Statistics indicating that violence against women remains a major problem in BiH society should alert institutions and NGOs to work harder to raise public awareness and educate women about protection mechanisms. At the same time, the media need to report more in a sensitized and responsible manner in accordance with journalistic standards, it was emphasized during the public discussion “Mapping human rights in the media with a focus on women’s rights”, which was held in Mostar.

The discussion addressed several issues related to media coverage of women who have suffered gender-based violence, as one of the most vulnerable groups in BiH society, but the role of government institutions, NGOs and the media in promoting and protecting women’s human rights in BiH.

During the discussion, a member of the Management Board of BH journalists, Faruk Kajtaz, emphasized that journalists report superficially on human rights, due to the stressful, extensive work and speed with which they work today, as well as their ignorance of the topic itself. “Women’s rights in the media are a very interesting topic, because when you look at it, it doesn’t seem like a problem, but when you start analyzing media content, it is clear that the texts are sensationalist, full of prejudices and stereotypes,” Kajtaz said. employees should start reporting in more detail and continuously on gender-based violence, precisely because of their role in creating public awareness.

Srđan Puhalo, researcher at the Pro Educa Education Center, said during the presentation of the research on women’s human rights that 76.9% of respondents stated that they experienced shouting and noise, and that 68.5% of them were victims of slapping and physical violence. “Data that 47% of women do not react when they experience violence are devastating, because they hope that it will not happen again, which at the same time signals to the perpetrator that he can repeat the act without being charged,” Puhalo said. shows that only 12% of women would report violence as soon as it occurs, while 43.5% of them would do so only after years of harassment.

Arnela Buzaljko from the Association “Women of BiH” says that this non-governmental organization, within which the Safe House in Mostar operates, has excellent cooperation with the centers for social work and the police, which do their job responsibly, but have a problem with the next instance, ie the judiciary. which usually imposes suspended sentences for perpetrators of violence. She adds that women victims of violence are very often manipulatively portrayed through the media as someone who caused violence with their behavior. “We need more intensive interaction between the media and the non-governmental sector, which deals with women’s rights, which can contribute to professional and ethical reporting on this issue,” said Buzaljko, emphasizing that organizations dealing with the protection of women who have suffered some forms of violence are constantly facing with the problem of funding, because they depend on the will of donors, while the government institutions in the HNK Canton do not have available mechanisms for financial support to such organizations.

The participants agreed that violence against women is a problem of the whole society and that all members of BiH society must be involved in its solution, from government institutions, through non-governmental organizations to the media, which should act in a preventive way, not just appear. then when the very act of violence occurs. Also, the participants concluded that it is necessary to work on the education of women and girls in order to be familiar with gender-based violence and its forms, but also the mechanisms of protection of women’s human rights.

The public discussion held in Mostar is part of the project “Media for Human Rights” implemented by the BH Journalists Association in cooperation with the European Federation of Journalists and the ProEduca Education Center, with the financial support of the European Union.